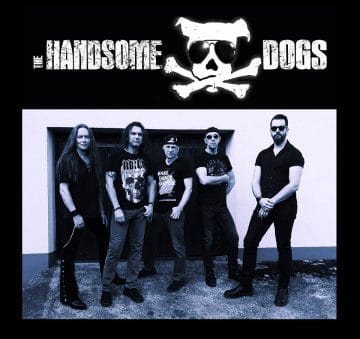 Speaking exclusively to Sleaze Roxx, The Handsome Dogs guitarist Pete Potens advised about the song: “”Granville Rocks” is a song which I wrote for a German book author named Bernd Ernst, who wrote a book Die Jukebox des Tesfels [The Devils’ Jukebox] that contains a short story about a ghost in a castle who likes rock n’ roll, etc. As a matter of fact, I am a protagonist in that story… It sort of tells a bit about my life as a musician. In return, Porty [Portner, vocals] and I wrote that song for Bernd Ernst and his book, like some sort of promotional music. We just released it under The Handsome Dogs‘ name and might eventully play it live. Don’t know yet. Furthermore, we are writing brand new Handsome Dogs material, which will be much heavier than before, going more in a melodic metal direction.”

Sleaze Roxx stated the following in its review of The Handsome Dogs’ debut full-length album Unleashed: “A great song doesn’t have to be fancy or complicated and The Handsome Dogs get that. They are also adept at letting their guitar riffs, the raspy singing from Porty Portner, etc. breathe during the course of their songs so that the listener can appreciate everything one step at a time. Drawing from influences ranging from AC/DC to Cinderella (check out the song “Shake”) to Van Halen (check out the intro to “Loverdose”), The Handsome Dogs have delivered a very good debut album with zero filler material.”