The all-female Iron Maiden tribute band, The Iron Maidens, consisting of guitarists Courtney Cox and Nikki Stringfield, bassist Wanda Ortiz, drummer Linda McDonald and lead vocalist Kirsten Rosenberg, were recently interviewed by ToddStar Photography and each asked what is the one Iron Maiden song that they each wished they could or would add to their setlist, and conversely, what song would they like to drop but can’t due to fan demand? 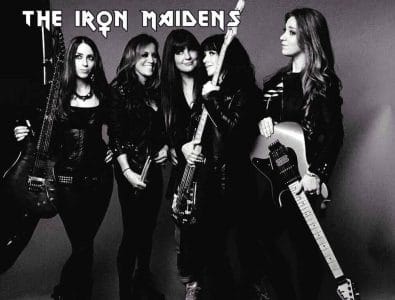 McDonald stated: “I’d love to add “Seventh Son of a Seventh Son” – we actually performed that one time only many centuries ago just with a previous lineup and Michael Kenney of Iron Maiden on guest keyboards!! I just think it would sound super amazing with the current lineup and it is so impressive, especially in a larger venue!! I’d be ok with not playing “Run to the Hills” HAHA! This song is a GREAT song, but when touring, it becomes quite exhausting at the end of a 90-120 minute set when you’re on night 3 or 4 of consecutive shows. But it is a fan favorite.”

Cox advised: “I would like to add “Seventh Son of a Seventh Son” and never play “Run To The Hills” ever again.. Sorry guys! haha.”

Stringfield chimed in: “Luckily we play a lot of my favorite Maiden tunes! They might have played these songs before I joined, but it would be cool to play “Seventh Son” or “Stranger in a Strange Land.” Or some songs from Book of Souls to do something fresh, but we don’t want to play anything Maiden is already playing. If I could drop a song, it would definitely be any of the hits since we play them every time, such as “The Trooper,” “Number of the Beast,” or “Hallowed Be Thy Name.” But, like you said, those are the songs people want to hear so we’re happy to play them!”

Rosenberg stated: “There are so many Maiden songs I want to add to our set but if you really want to hold my feet to the fire, I’ll go with “The Prophecy” off one of my all-time fave albums, Seventh Son of a Seventh Son. This is dangerous territory because of course some Maiden fan will be offended, but if I could wave my magic wand I’d put “Remember Tomorrow” to bed. Nighty ‘night. Although, we haven’t actually played it in a long time because, well hey whaddya know, there’s not such strong fan demand for that one–d’oh!”

Finally, Ortiz advised: “The songs we aren’t playing that we want to do, we eventually get to. Even now, we’re learning a song we all like that we haven’t played before but I don’t want to say what it is because the band wants to keep it a surprise until the show time. There are no songs I would like to permanently drop but there are some I wouldn’t mind taking a short break from: “The Trooper,” “Hallowed Be Thy Name,” and “Wasted Years” are a few.”

You can read the rest of the interview with The Iron Maidens at ToddStar Photography.