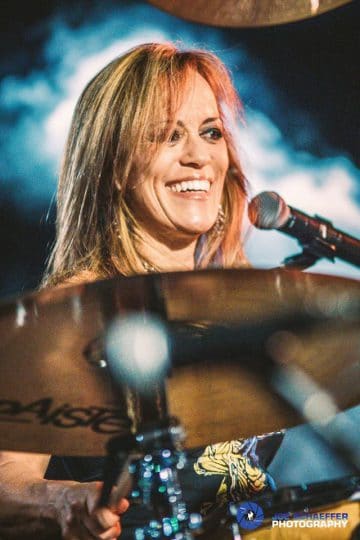 McDonald was asked to compare the drumming style of long-time and current Iron Maiden drummer Nicko McBrain to his predecessor Clive Burr‘s to which she stated (as transcribed by the Australian Rock Show podcast with slight edits):

“I would have to say their energy. I mean people say, ‘Can you compare them, who’s the better [drummer]?’ You can’t do that. They’re completely different styles. The common denominator is that they’re both Iron Maiden drummers.”

“The style of music that Clive Burr was involved in was their [Iron Maiden’s] earlier days, when it was a lot more punk and raw. That was their influence. That was where they were coming from. It was much more raw and in-your-face and driving — just pure energy. That’s more of Clive Burr’s drumming.”

“Nicko McBrain is a little bit more refined and more articulate and he verses his fills much differently than Clive Burr does. He’s got a very very different energy. I had to get used to that to learn his parts, ’cause Clive Burr is the whole reason I started playing drums and I just was so drawn to his [Burr’s] energy. So it was a total night and day thing when Nicko McBrain jumped on board. But you couldn’t have found the more perfect drummer for the direction that Maiden was heading at that time to present. It would be so interesting to hear how Clive Burr would have played the Powerslave era [material] moving forward. We hear how Nicko can play the Clive Burr era. It would be interesting to hear the other way around but unfortunately that won’t happen. But they’re just completely different I think their energies and their styles are just completely different.”