The Iron Maidens guitarist Nikki Stringfield was recently interviewed by Mick Michaels for The Cosmick View and was asked why she thinks that tribute bands have experienced such a surge in popularity in recent years. 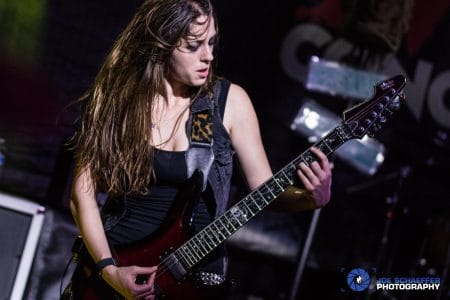 Stringfield advised: “I think there’s several different factors. Tribute acts are a fraction of the cost, and our favorite Metal Gods are getting older and not touring as much. Tribute bands usually cover more material and play fan favorites as well as being able to play more often.”

In terms of whether playing in a tribute band such as The Iron Maidens have perks over an original project, Stringfield indicated: “Yes and no. Of course having an audience that is so passionate makes it so awesome…everyone knows all the lyrics and it definitely makes it more fun when they’re having a blast! On the other hand, that means you can’t miss a note. I couldn’t imagine paying tribute to any other band honestly. Playing with an original project is rewarding in the fact that it is your own music and nothing can quite compare to that feeling.”

With respect to how she would reply to someone who says tribute bands have made it harder for up and coming original bands to get noticed or even find an audience, Stringfield replied: “Your music will speak for itself. People can like tribute bands and still enjoy and seek out original music. I don’t think they necessarily compete with each other.”

You can read the rest of the interview with Nikki Stringfield at The Cosmick View‘s website.