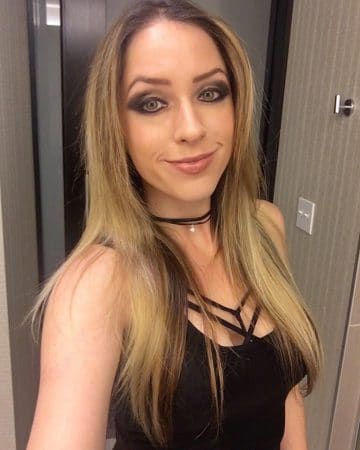 The Iron Maidens and now former Femme Fatale guitarist Nikki Stringfield was recently interviewed by Rich “The Meister” Dillon for CGCM Podcast and the female guitarist spoke about her upcoming debut solo EP.

Stringfield stated when asked if she is working on an EP: “Hell yeah! I actually started recording vocals this week so it’s getting close to being done! I’ve been working on it for a year now and with all of the touring, it’s been hard to get things going. It will be 5 songs and I’m planning on having it available physically and digitally.”

In terms of when the EP will be released and whether that will be done independently or via a label, Stringfield indicated: “I’m hoping by the end of the summer at the latest. I’ve still got a lot of work to do after we get it mixed and mastered.. I’m planning on doing everything on my own as of right now.”

On whether the songs “As Chaos Consumes” and “Save Our Souls” will be on the EP, Stringfield advised: “Those two songs won’t be on this album.. they were my first recording attempts and I wasn’t really sure what I was doing yet. This time it’s being recorded and produced professionally and it’s going to sound so much better. It already does without being mixed! I’ve written and played everything myself except for the drums.. unfortunately, I’m nowhere near coordinated enough for that haha. I just made basic drum tracks to get the idea of the song down and let my producer Jesse take over from there since he’s a drummer as well! Patrick Kennison is recording and producing my vocals so he’s really pushing it to the next level. I’m really excited!”

You can read the rest of the interview with Nikki Stringfield at CGCM Podcast‘s website.

“As Chaos Consumes” – The debut single from guitarist Nikki Stringfield available on ITunes now!https://itun.es/us/OvRSjbMixed and Mastered by: Jesse Bilson …

Nikki Stringfield‘s Save Our Souls” video: