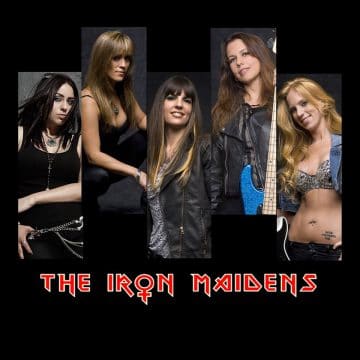 McDonald was recently interviewed by the Australian Rock Show and the following is the show’s press release in that regard (with slight edits):

“On the eve of their first tour ever tour of Australia, drummer Linda McDonald from The Iron Maidens has revealed plans for the band to record a new tribute album in coming August. Speaking to the Australian Rock Show Podcast, McDonald stated:

‘We are actually going into the studio to record another Tribute CD in August. We’ve already released a few, but they’re all out of print – people keep asking for them. The CD’s we did record previously do not feature any of the more recent band members –  so we’re gonna go ahead and do that – give the fans what they want.’

McDonald also spoke about Phantom Blue‘s plans to re-unite with the original members, but after guitarist Michelle Meldrum passed away in 2008, it never eventuated.”

In May and June, The Iron Maidens remove all the wheel blocks, gather speed and get airborne – hitting Australian stages for the first time. Powerhouse drumm…