California rockers The Jacks have released a video for their song “Walk Away” from their cupping self-titled debut album, which will be released on June 28, 2019. 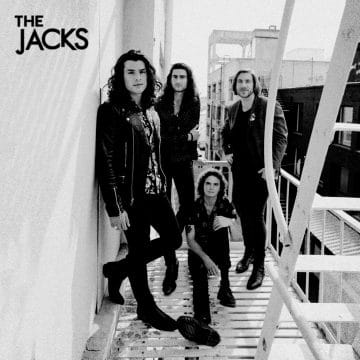 Los Angeles’ The Jacks stand by that claim, thanks to a heavy influence from the British Invasion of the ‘60s and ‘70s mixed with Southern Rock. To blend those influences seamlessly, the band joined forces with legendary producer Matt Wallace (Faith No More, Maroon 5, Blackberry Smoke) and mixer Andrew Scheps (Red Hot Chili Peppers, Adele, Hozier) at Los Angeles’ famed Sunset Sound Recorders.

“Working with Matt Wallace was an incredible experience. He was able to take our vision for our songs and record them exactly how we’ve imagined for the past few years,” adds The Jacks. “And it was a true honor to work with the legendary Andrew Scheps. We couldn’t be happier with his influence on the upcoming EP. We now have an amazing team with Edgeout and UMe, and are so excited for the world to hear our music.”

As Wallace remarks, “The Jacks deliver up lean, rugged rock & roll with songs that feel like instant classics that make you want to move, with earworm hooks and melodies that will have you kinda upset when you find yourself unintentionally and inappropriately humming their songs at work, in church, in court, or at wakes. If the Strokes, Cage the Elephant, and the Stones had an equally talented, but more handsome baby, it would be named The Jacks!”

The mix of songs on the EP is fitting since The Jacks got their name from a fan telling them that they were “jacks of all trades” when it came to playing different styles and blending their songs with those of their idols at their early concerts, and each of these tracks shows off a different side of the ensemble. From the hard-edged rockers to the more melodic numbers, you can hear how the band members have poured their hearts into each of the songs.

And the way they see it, playing rock at a time when pop and hip-hop are dominating the charts is an act of defiance. If any band is poised to help bring authenticity back to rock & roll, it’s The Jacks. The quartet has been making a steady ascent since forming in Los Angeles in the summer of 2016, selling out gigs at legendary hometown venues like the Troubadour, Roxy and Viper Room, supporting legends like the Doors‘ Robby Krieger (who told them personally that he liked their music) and playing big festivals like Aftershock and Louder Than Life. At one gig, they ran into John Fogerty who told them, “It’s cool to see some rock & roll again.”

“We’re trying to push the boundaries of the rock & roll genre by incorporating modern elements, but still keeping the core structure of a four-piece band,” Stanback says. “We are creating a sound you’ve never heard before, but feels familiar.”

On the strength of these early live performances, eventually the band entered a local radio station’s battle-of-the-bands competition in 2017 – and won a recording contract. Instead, they passed and continued to tour and work on their songs. Earlier this year, they were tapped to perform at the NFL pre-Super Bowl and NHL Winter Classic events. For the 2019 Stanley Cup playoffs, The Jacks’ music was chosen to be heard during the games’ broadcasts, highlight reels, and commercial bumpers. They kept their love of hockey going into the off season, as they were tapped to perform as the on-stage band at the 2019 NHL Awards, which took place June 19 at the Mandalay Bay Events Center in Las Vegas.”

The Jacks‘ “Walk Away” video:

THE JACKS – Walk Away