The Jokers have just released a video for “Run For Cover” from their forthcoming new album Hurricane which will be released on October 16, 2015. The UK based rockers are known to have a sound in the vein and combining the likes of AC/DC, Hayseed Dixie, Airbourne and KISS.

The group’s Facebook bio (with slight edits) states: “The Jokers, who hail from the North West of England, were formed in 2006, with the aim of creating the world’s greatest rock and roll band. Their debut album, The Big Rock ‘N’ Roll Show, while mixed by Mike Fraser in Vancouver (straight after he had mixed AC/DC’s 10 million plus selling Black Ice album), was only recorded in guitarist Paul Hurst’s Liverpool living room, with duvets hanging on the walls to help the sound and provide a makeshift vocal booth….

The band then spent two years on the road building a substantial live following supporting the likes of Hawkwind, Y&T, Joe Elliot & The Down N Outz, Argent, Anvil and Fozzy, selling over 8,000 CD’s and 6,000 downloads of The Big Rock ‘N’ Roll Show on their own independent record label along the way.

The Jokers then hooked up with producer Andy Macpherson (Eric Clapton, The Who, 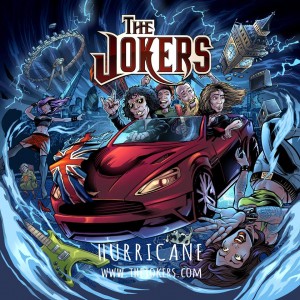 Barclay James Harvest, The Buzzcocks, etc), and began writing their second album, Rock ‘N’ Roll Is Alive, in his Revolution Studio in Cheadle Hulme, Cheshire, early in 2011. After two years of perfectionist recording and mixing sessions, Rock ‘N’ Roll Is Alive was finally mastered by Tim Young at Metropolis studios in London in February 2013. When massive hard rock label SPV/Steamhammer’s Head of A&R Olly Hahn heard the album, he immediately offered The Jokers a worldwide record deal and scheduled Rock ‘N’ Roll Is Alive for release in September 2013… After a series of sell out pub and club gigs in the North West, The Jokers launched the album in London at a packed out Borderline gig on September 10, 2013… The Jokers then set off on a 17 date headline tour of Spain, before returning to play at the Hard Rock Hell VII festival in North Wales on November 30, 2013 and the inaugural Planet RockStock festival in Great Yarmouth on December 8, 2013.”

The Jokers‘ third album Hurricane was recorded with Tom Wise and is scheduled for release on October 16, 2015.

The Jokers Run For Cover