The Last Vegas guitarist and Furbaby frontman Adam Arling was recently interviewed by Sleaze Roxx. Arling has toured all over the world with The Last Vegas, Warrior Soul and Urge Overkill, and The Last Vegas have opened for such heavyweights as Mötley Crüe and Guns N’ Roses.

During the interview, Arling recalled one night when The Last Vegas were on a tour opening for Guns N’ Roses before singer Axl Rose‘s reunion with guitarist Slash and bassist Duff McKagan in 2016, and when they got to see / hear first hand an Axl Rose ‘meltdown.’ 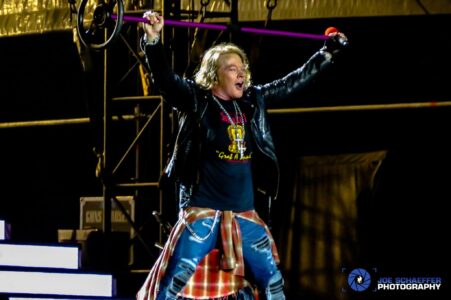 Arling indicated: “For some context, The Last Vegas were playing the Tabernacle in Atlanta [Georgia, USA], on a run opening for Axl’s Guns N’ Roses. The dressing rooms at the Tabernacle are all on the second floor, lined up down a long hallway. Upon arrival, we noticed the dressing room adjacent to The Last Vegas was labeled “GnR”, which is a little odd, but since the Guns N’ Roses camp were on buses, it meant it was usually just a quick pit stop on the way to the stage for the guys to drop in and smoke a cigarette, hang for a moment, whatever, on their way to the stage.

However tonight, guys in the band were hanging out backstage. Richard Fortus, Frank Ferrer, especially were super cool dudes. Something was a little different. Per usual, Guns N’ Roses management knocked our set time back an hour, to like 10:00 pm, which was prime time for an opening band. As we got back up to our dressing room around 11:15 pm, we could hear what we thought was Axl’s voice next door… Man, maybe we meet the man tonight. We’re like kids in a candy store. Fast forward 2.5 hours (or whatever their set length was…. long) to like 2:30 am-ish, we’re just chilling and we hear some type of commotion and screaming, inching down the hallway. My brother [Nathan Arling] who’s in the hallway for some reason, then gets barrelled over by an enraged, red-faced Axl yelling, screaming, ripping stuff off the walls, as he makes his way to their dressing room next door and slams the door.

Then we just hear. “Where is it?  Where is my fucking bag? Oh it just disappeared on its own?” [Insert two minutes of sound of a dressing room getting destroyed here] Then, “Oh I get it, lemme see… little green martians snuck into my fucking room and stole my God damn bag? Is that what really happened?” [Insert more sounds of a dressing room getting destroyed] And the The Last Vegas guys are like in a movie, all lined up with our ears to the wall, catching every minute. Then the door slams open, some final cursing and he’s off in the night. Fifteen minutes of backstage destruction fury, Axl-style. It was awesome.

This anecdote is not half as good as Danny Smash’s hanging out with Axl on his birthday in Las Vegas after The Last Vegas opened for ’em, in Axl’s private suite with his entourage until 11:00 am the next morning, while Axl tended bar and reminisced.  But that’s Danny’s memory, for another time perhaps…”