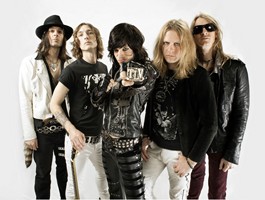 The Last Vegas have signed to FrostByte Media to release their fourth full-length album ‘Bad Decisions’, which is set for a North American street date of August 28th. Produced by Johnny K (Megadeth, Disturbed, 3 Doors Down, Airbourne), the album was recorded in the band’s hometown of Chicago and contains the straight-up rock n’ roll meets garage/punk rock sound for which the band has come to be known.

Of the new tracks, lead singer Chad Cherry referred to them as “a little more raw, a little more groovy and more Last Vegas than the previous album…”, while guitarist Adam Arling declared with DIY fervor, that the album contains, “No samples, loops, backing this, that, whatever a lot of bands do nowadays. Just five guys rocking.”

Hailing from Chicago and formed in 2005, The Last Vegas cut their teeth relentlessly playing in support of two independent releases. In 2009, the band burst on to the national scene when Motley’s Crue’s Nikki Sixx saw them play live in Los Angeles and subsequently co-produced their third album, ‘Whatever Gets You Off, which topped the Sleaze Roxx Top 10. More touring followed, including a stint opening Motley Crue’s “Saints Of Los Angeles” tour.

Now recharged, with an album that returns to their raw rock n’ roll roots, The Last Vegas is ready to hit the road again in support of ‘Bad Decisions’. The Onion referred to their sound as “Swaggering, stomping, balls-out guitar rock”, while The Chicago Sun-Times declared them to be “Red hot garage-rockers.” The Last Vegas is Chad Cherry (vocals), Adam Arling (guitars), Danny Smash (bass), Nate Arling (drums) and Johnny Wator (guitars).