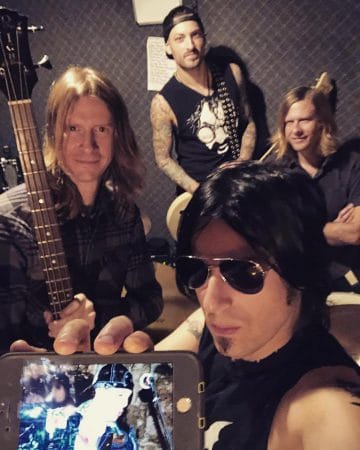 Back in February 2018, The Last Vegas had advised that they were working on new material but very little public activity arose afterwards followed by a Facebook post in June 2018 that the band was still “alive” and “kicking ass.”

Back in or about early 2017, Cherry moved from Chicago, Illinois, USA where The Last Vegas are based to Los Angeles, California, USA. The singer formed a new band called The Claws in April 2017 which also includes guitarist Gary Martin, bassist Terry Love and drummer Johnny Haro.

The following message was posted on The Last Vegas‘ Facebook page earlier today:

“What’s this?!? The boys are back in town!!! Danny Smash is trapped somewhere in the arctic but we got him online! Time to record some new TLV ROCK-N-ROLL!!! ??? — at Hollywood Boulevard.”

The Last Vegas‘ last studio album Eat Me finished at #15 on the Sleaze Roxx Readers’ Top 20 Albums of 2016 to which Sleaze Roxx stated: “The Last Vegas are not content to rest on their laurels and are willing to change it up, grow and experiment from one album to the next. That is definitely the case with the Chicago group’s most recent album Eat Me, which runs the gamut from ’60s sounding Beatlesesque tracks to darker Marilyn Manson like songs. Eat Me definitely covers a lot of ground, which may explain why The Last Vegas have been unable to reach the pinnacles of years past with Sleaze Roxx readers. It seems almost hard to believe that The Last Vegas charted at #6 in 2012 with Bad Decisions and #7 in 2009 with Whatever Gets You Off. With 2014’s Sweet Salvation not having charted in the Sleaze Roxx readers’ top 20 albums, The Last Vegas‘ subsequent album Eat Me finishing at #15 this year has to be seen as a comeback of sorts in any case. One thing is for sure, The Last Vegas march to their own drummer and who knows what their next album will sound like.”

The Last Vegas‘ “Bloodthirsty” video (from Eat Me album):