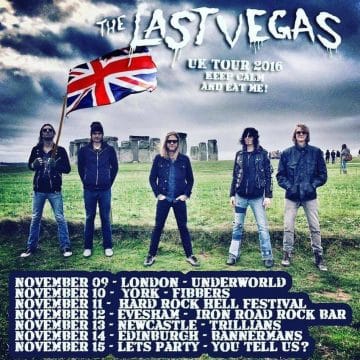 Chicago, Illinois, USA based rockers The Last Vegas are poised to embark on a 2016 tour of Europe, which will see the group play 29 shows in 33 days in six different countries. 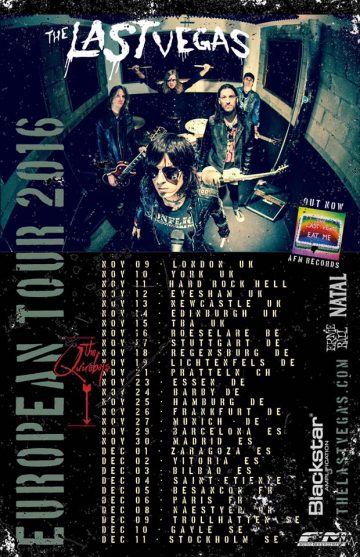 Sleaze Roxx caught The Last Vegas playing live at This Ain’t Hollywood in Hamilton, Ontario, Canada on April 20, 2016 and stated in its concert review:

“Eventually, The Last Vegas were all up on stage and kicked things off with “Bloodthirsty” from their new album. Singer Chad Cherry was decked out in some sort of skeleton outfit complete with black gloves with what looked like a white skeleton on each. He seemed to have a jacket on for the entire night. It would have been interesting to see what his outfit looked like had he taken off his jacket. Bassist Danny Smash was wearing a jean jacket, white t-shirt, bandana and baseball cap on backwards which gave him a look a little removed from the rest of the band. Guitarist Bryan Wilkinson had what I imagine the “sleaze rock” look to be including many tattoos throughout his body. Guitarist Adam Arling looked tall and lean with his lanky frame. Drummer Nate Arling had long hair and a tank top and reminded me of what AC/DC guitarist Malcolm Young might have looked like if he played the drums.

I can’t remember the last time I went to a show where I could not really identify any of the band’s songs. That being said, that was not an issue at all while seeing and hearing The Last Vegas play because I instantly liked every one of their songs except the one ballad — I’ve never been crazy about ballads — that they played on this night. In addition, the group sounded really good which made all the songs pleasurable to listen to even if I did not know them or not that well.”