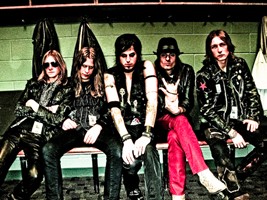 Hot off the heels of a successful tour of Spain, The Last Vegas returned home to Chicago, Ilinois on Tuesday only to learn that they would be packing up and hitting the road again to travel to Atlantic City, New Jersey to open for Guns N’ Roses at the House Of Blues this Friday, February 24th. Tickets for the show can be purchased at Ticketmaster.com.

The band’s year is off to a busy start with the tour of Spain and the support slot with Guns N’ Roses in Atlantic City. The Last Vegas was embraced with open arms by their legions of new fans in Spain and a portion of the video footage that is available from that tour can be seen at www.youtube.com/watch?v=uvHdwqKfBRc. Check out the band’s Facebook page for even more footage and photos from the tour. The band officially started debuting new songs live on “the Other Side Tour” in Spain and will do the same in Atlantic City.

After extensive touring with some of rock’s biggest acts (Motley Crue, AC/DC, Buckcherry, New York Dolls, Papa Roach) in support of their last studio release, 2009’s ‘Whatever Gets You Off’ (Eleven Seven), The Last Vegas returned to their hometown of Chicago in 2011 to record new tracks for the follow-up album with Grammy nominated producer Johnny K (Disturbed, Megadeth, 3 Doors Down, Staind, Airbourne) at Groovemaster Studios. The album is finished and the Last Vegas will be releasing their new yet-to-be titled full-length with a new label partner in 2012 and extensive touring is planned for the rest of the year.

In November 2011, The Last Vegas released a preview of the upcoming full length, the ‘Other Side’ EP both digitally and on a limited-edition CD. A video for the title track was produced by and stars legendary Hollywood scream-queen, Sybil Danning (Howling II, Halloween, Werewolf Women of the SS) and can be viewed below. Digital copies of the EP can be obtained iTunes and a special bundle package of the physical copy at cmdistro.com.

The Last Vegas are a rock band hailing from Chicago, IL. Their music draws influence from ’70s classic rock and glam, ’80s hard rock and heavy metal and garage and punk rock while at the same time maintaining a unique sound all their own. The band is comprised of guitarists Adam Arling and Johnny Wator, drummer Nate Arling, bassist Danny Smash and vocalist Chad Cherry.