Great news for The Last Vegas fans as the group is working on new material despite the distance between singer Chad Cherry (who lives in Los Angeles, California, USA) and the rest of the group who presumably are still in Chicago, Illinois, USA. 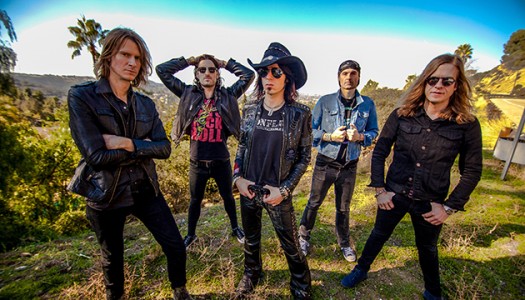 The following message was posted by The Last Vegas‘ frontman Chad Cherry on the group’s Facebook page earlier today:

“Working on a few new THE LAST VEGAS tunes this morning. I can be thousands of miles alway and still make music with the boys. Gotta love modern technology. Sure, we might not tour like maniacs anymore but we are still creating great new music together. It will always be home. It will always be in our blood.
–C.C.“

Cherry also posted the following comment to someone who asked about a vinyl release for Eat Me: “I think we’d probably focus on putting out new stuff. EAT ME on vinyl would be really great tho. It’s the only TLV album that hasn’t received the wax treatment.”

Sleaze Roxx stated the following in one of its two reviews of Eat Me: “What Eat Me has in common however is that all compositions swing with rock-steady percussion, assorted chunky guitar riffs, and multiple choruses amid dramatic start-stops throughout the record. With Eat Me, the band has confidently branched out from the shadows of being another “’80s rock” band and now own their matured sound. Fans of The Last Vegas will however feel at home with other tracks carrying their more fun signature sound such as “Bloodthirsty”, “Along For The Ride” and “Voodoo Woman.” One outstanding feature on Eat Me (as with all The Last Vegas albums) is the stunning display of Chad Cherry’s vocal range. Cherry covers so many different vocal styles and pitches that it often sounds as though the band has employed multiple lead vocalists.”