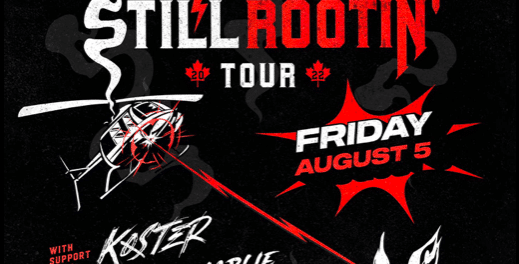 The following message was posted in part on The Lazys‘ Facebook page earlier today:

“After 2 years of being locked away WE ARE FINALLY BACK!!! This summer we’re headed to Canada for a select run of festivals, club shows and to hit the studio to record new music!!!

Tickets to these shows go on sale this Friday and will SELL OUT so make sure you get in quick! Head to thelazysband.com for all info

“Don’t give up. Never ever give up. The Lazys are the epitome of perseverance as the group dates all the way back to 2007 or so yet have only made a real dent in the last five or six years with their albums The Lazys and Tropical Hazards. If you can find and listen to some of The Lazys‘ earlier records, which includes the EP Tattooed Addiction (2007), the EP Nicotine Soul (2007), the Red / Yellow EP, theGreen EP (2009), the full-length Prison Earth (2010), the EP Temptation Never Like You (2011) and The Younger Years (2007-2011) (2015), you’ll find a diamond in the rough that needed a lot of polishing and refining. The Lazys never gave up and even relocated from Australia to Canada to make their rock n’ roll dreams a reality. Things for the band really seemed to turn when they hooked up with Billy Talent guitarist Ian D’Sa who co-wrote most of the songs on their brilliant album Tropical Hazards. That record is so full of killer tracks that the band doesn’t even play one of its best songs ever (in my humble opinion) — “Take Back The Town” — in a live setting. The Lazys are currently working on their follow up to Tropical Hazards and there is no need to say that this is my most anticipated release for hopefully 2020. No pressure lads!”

The Lazys‘ “Half Mast Blues” video: