The Lazys are in the midst of their Canadian Half Mast Blues Tour 2019 and their frontman Leon Harrison is apparently frustrated with fans / concert attendees using their phones while standing in the front row of the band’s shows. 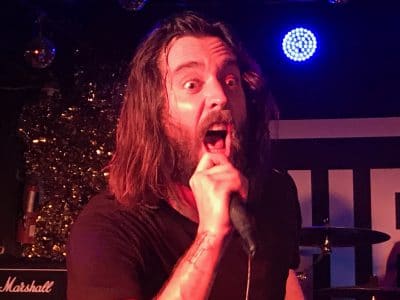 “I never thought id say it but personally, I hate it when ppl stand front row at shows filming on their smart phone. Its intrusive, distracting and let me tell you, the footage, sounds and angles absolutely suck! If filming is something that interests you, spend some money on gear and respect the 3 song limit. The front row is for fun. Put the phone away, enjoy yourself and let the band connect with you personally, you may even have a better time. Cheers”

Harrison is not the first artist to complain about the use of phones at concerts.

L.A. Guns founder and lead guitarist Tracii Guns posted the following message in part on his Facebook account back on August 9, 2017: “If you are videoing at the front of the stage it seems to us you aren’t involved in the moment. It would be nice if you could video from the back so we can connect with humans in the front instead of cameras.”

In an interview with the Buzz posted in February 2018, Quiet Riot guitarist Alex Grossi stated: “I like to look at where music is going technology-wise, and I love that people are banning cell phones at shows. Jack White just announced he was doing it, the Misfits are doing it. You have to lock your phone away in a pouch and don’t get it back until the end of the show.