The Lazys frontman Leon Harrison left a video message on Facebook today to raise awareness for the plight of missing an murdered indigenous women which is captured in the group’s song “Somebody’s Daughter” (see below) from their latest studio album Tropical Hazards, which was released earlier this year. Harrison stated as follows (as transcribed by Sleaze Roxx): 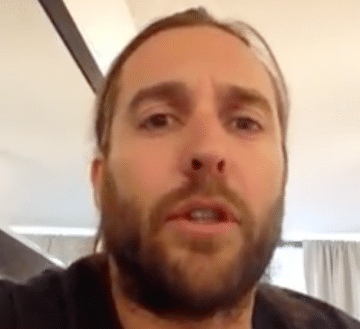 “Hey guys — Leon here. I thought today I’d make a different video. Yesterday, I was out and about and noticed a bunch of red female clothing hanging from a church and so forth. Recently, I wanted to find out what it’s about and I soon discovered that it’s a week representing and creating awareness for missing and murdered indigenous women. Now, if you’re not aware, this is a big passion of mine and the band’s. So much so that on our latest album, we have a song called ‘Somebody’s Daughter.’ And ‘Somebody’s Daughter’ is about exactly that — murdered and missing indigenous women.  The atrocities they face and their families go through and the fact that really a lot more could be done about this problem. So in light of this week, I’d really like to invite everybody to our Spotify page to listen to ‘Somebody’s Daughter.’

If you haven’t thought about this issue before, if you don’t know about this issue, if you don’t know the magnitude of this issue, have a listen to the lyrics and maybe this is your time to self-reflect on this matter. These women deserve more. Indigenous people deserve more. Bridging the gap is definitely a passion of mine. I don’t know everything about indigenous affairs. I am not going to pretend that I do but everybody deserves an equal go in this world. So yeah, take a listen to the song. Feel free to leave a comment and let us know what your thoughts are and let’s create some awareness this week because it’s a very very important issue and a lot more can be done and these women, they deserve a lot more. Take care.”

Sleaze Roxx stated the following in its review of Tropical Hazards including the song “Somebody’s Daughter”:

“Usually, if an album has two to three really great songs such as The Lazys‘ self-titled album, you can’t ask for much more. After all, the “older” bands such as Iron Maiden, AC/DC, etc would likely be pleased with one really memorable song from their latest album to include into their live set. In The Lazys‘ case, there are five tracks that I would consider in the phenomenal category in terms of engagement, great melodies and overall catchiness. The first four tracks consisting of the first single “Nothing But Trouble,” the slide guitar filled “Little Miss Crazy,” the peppy “Picture Thieves” and the awesome story telling “Half Mast Blues” as well as the album closer “Take Back The Town” can each give me goose bumps at any given time. The rest of the tracks on Tropical Hazards are also solid with the exception of the kind of bland ballad “Young Modern Lightning” which is almost an anomaly in that I often just skip that song while the rest of the tracks are all so good. Given that the other ballad “Somebody’s Daughter” is actually quite engaging, I wish that The Lazys would have just elected to forego putting “Young Modern Lightning” on Tropical Hazards. Nine killer songs would have been just fine, thank you.”