The Lazys release video for “Nothing But Trouble” and to tour Canada with The Wild!

Aussie rockers The Lazys have released a video for their new single “Nothing But Trouble” from their upcoming new studio album Tropical Hazards, which will be released on February 16, 2018. 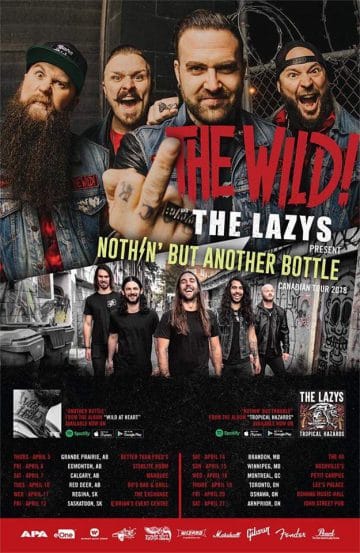 The following message was posted in part on The Lazys‘ Facebook page earlier today:

“???? Canada???? in support of our brand new single ‘Nothing But Trouble’, we’ll be hitting the road this spring with Western Canada’s The Wild for the ‘Nothing But Another Bottle’ Tour. These shows promise to be nothing but wild so get your tickets and get ready to rock!! New record ‘Tropical Hazards‘ out this Friday!!!!”

The following message was posted on The Wild!‘s Facebook page at about the same time today:

“Canada! We’re lookin’ to kick this year off right… in the dick! The Wild! & The Lazys present “Nothin’ But Another Bottle” Canadian Tour 2018! This tour is mayhem. This tour is trouble. This tour is not givin’ a fuck, no bullshit rock’n’roll! So get your tickets NOW & we’ll see you crazy bastards on the road. Do not miss this show when we roll through your city!
??⚡??
…more announcements to come later in the week. We’re not done yet. Stay tuned! ?
GxDxWxB“