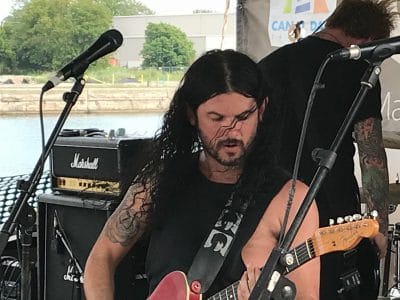 Smith asked Shearer whether he ever wants to play lead guitar to which the latter replied (as transcribed by Sleaze Roxx):

“Aah. It’s one of those things. I have a different opinion of it. I have never been drawn to the style of shredding. Like it’s impressive nonetheless. I just go, ‘Wow!’ Like whatever. So I never wanted to play like that and i actually can’t. I’m not that technical like [The Lazys lead guitarist] Matt [Morris]. Like I don’t need to be [inaudible] Matt in our band. There’s no room for it in our band so me coming into the band kind of suited it. It was like, ‘Matt can do that’ and I can be part of the rhythm section. In terms of wanting to play lead, not really ’cause I worked with a big Australian due back in the day — Harry Vanda from The Easy Beats. He recorded AC/DC‘s earliest stuff. He used to refer Angus Young‘s solos as “turkey gobble” and I always found that funny. Harry is a great guitar player. He’d lead. But you know, we’d get a song and he’d be, ‘OK. Verse, chorus. Verse, chorus and then Angus‘ “turkey gobble” and then chorus, and that’s the end of the song.”