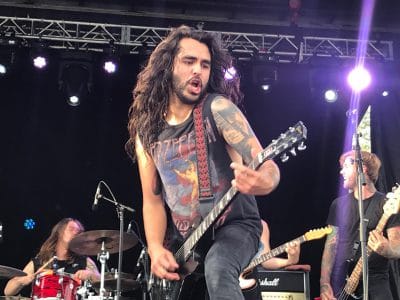 “Usually, if an album has two to three really great songs such as The Lazys‘ self-titled album, you can’t ask for much more. After all, the “older” bands such as Iron Maiden, AC/DC, etc would likely be pleased with one really memorable song from their latest album to include into their live set. In The Lazys‘ case, there are five tracks that I would consider in the phenomenal category in terms of engagement, great melodies and overall catchiness. The first four tracks consisting of the first single “Nothing But Trouble,” the slide guitar filled “Little Miss Crazy,” the peppy “Picture Thieves” and the awesome story telling “Half Mast Blues” as well as the album closer “Take Back The Town” can each give me goose bumps at any given time. The rest of the tracks on Tropical Hazards are also solid with the exception of the kind of bland ballad “Young Modern Lightning” which is almost an anomaly in that I often just skip that song while the rest of the tracks are all so good. Given that the other ballad “Somebody’s Daughter” is actually quite engaging, I wish that The Lazys would have just elected to forego putting “Young Modern Lightning” on Tropical Hazards. Nine killer songs would have been just fine, thank you.

Last year, after just a few listens, I knew that The Wild!‘s Wild At Heart album would be a contender for the top album of the year and if it wasn’t for Tales Of The Porn‘s debut album H.M.M.V. stealing their thunder mid-way throughout the year, Wild At Heart would have finished as the #1 album on the Sleaze Roxx’s Top Ten Albums of 2017. It’s still really early in the year but Tropical Hazards is exactly the type of album that can finish at the top of Sleaze Roxx‘s year end list for 2018. Do yourself a favour and check out The Lazys‘ latest album Tropical Hazards. You won’t regret it.”

The Lazys‘ “Half Mast Blues” video: