The Lazys with many special guests to headline ‘Australia’s Up S*it Creek Bushfire Fundraiser’ on Mar. 28th

The wildfires that have decimated Australia have been absolutely disastrous and caused irreparable damages to that country’s environment and wildlife. Many people and organizations have stepped up to combat the fires as well as raise money to assist fighting the fires and to try to repair the damages.

Australian rockers The Lazys, who relocated to Canada about five years ago, are headlining a fundraiser titled Australia’s Up S*it Creek Bushfire Fundraiser that will take place at the Oshawa Music Hall in Oshawa, Ontario, Canada on March 28, 2020. The Lazys will have a number of special guests including Red Dragon Cartel singer and Harem Scarem drummer Darren 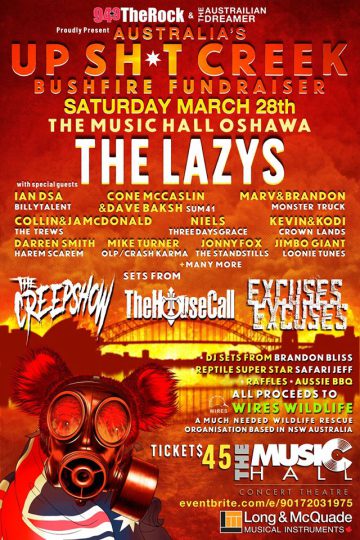 James Smith, Billy Talent guitarist Ian D’Sa as well as members from Sum 41, Monster Truck, Three Days Grace, Crowns Land, The Trews and many more. Opening acts include The Creep Show, The House Call and Excuses Excuses. Tickets go on sale via Eventbrite on January 22, 2020 at 10:00 am.

How bad are the Australia wildfires? CNN reported in part as follows in an article titled Australia’s deadly wildfires are showing no signs of stopping. Here’s what you need to know back on January 13, 2020:

“Entire towns have been engulfed in flames, and residents across several states have lost their homes. The heaviest structural damage occurred in NSW, the country’s most populated state, where 1,588 homes have been destroyed and over 650 damaged.

A total of 28 people across Australia have died this fire season, including several volunteer firefighters

About half a billion animals have been affected by the fires across NSW, with millions likely dead — and that’s a conservative estimate. That number of total animals affected could be as high as one billion nationwide, according to ecologists from the University of Sydney.

The figures for NSW include birds, reptiles, and mammals, except bats. It also excludes insects and frogs, so the real sum is almost certain to be higher, the ecologists said.

Almost a third of koalas in NSW may have been killed in the fires, and a third of their habitat has been destroyed, said Federal Environment Minister Sussan Ley.

Some species, like koalas, aren’t in any immediate danger of extinction because they are spread out across the country, said the university ecologists. But others that live in more niche environments with lower populations, including certain types of frogs and birds, could be wiped out entirely if their habitats are hit by the fires.

These are pretty good estimates based on previous research on population density — but until the fires stop, researchers have no way of surveying just how extensive the damage is, and exactly how many animals have died.”