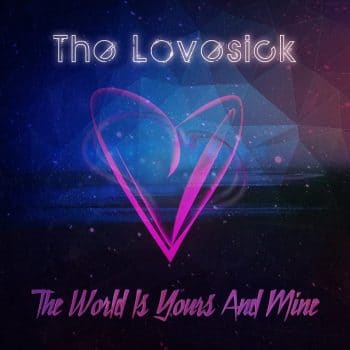 Atlanta, Georgia, USA based melodic rockers, The Lovesick, have released a video for their new song “The World Is Yours And Mine” which will be available on iTunes and all other digital formats as of Friday, September 2, 2016. The single will be part of The Lovesick‘s debut album entitled Hope 4 A Helpless World, which will be released in October 2016.

Sleaze Roxx readers may remember The Lovesick‘s frontman Jason Morey given that he was featured on Sleaze Roxx in the past while he fronted the group The Sinner Saints. Sleaze Roxx stated the following in its review of Sinner Saints‘ debut album The Other Tomorrow back in 2012: “Oddly enough The Sinner Saints also moonlight as a Bon Jovi tribute named Slippery When Wet, but that is hard to envision while listening to this album because there is nothing glam or hair metal about it. In fact, picturing Jason Morey‘s boozy bark singing something like “Bad Medicine” is a very big stretch — he must be some sort of musical chameleon. Back on topic though, while The Other Tomorrow is rather unfocused at times, The Sinner Saints have shown enough moments of brilliance to garner another listen on their next effort.”

Based on The Lovesick‘s debut single, it appears that Morey is now focusing more on his melodic chameleon side than his southern rock side.

The Lovesick‘s “The World Is Yours And Mine” video:

The Lovesick – The World is Yours and Mine official video

The debut single from The Lovesick from their forthcoming cd “Hope 4 a Helpless World” coming in October.Featuring Ross Childress on EbowSingle available on …