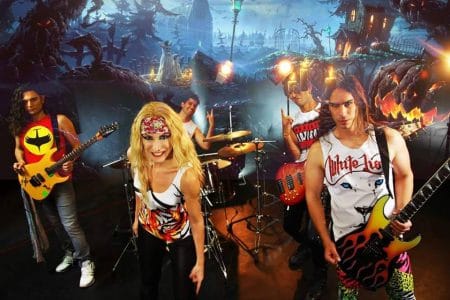 Turkish rockers The Madcap performed an acoustic version of their anthem “Rock N’ Roll Revolution” for Balcony TV in Ankara, Turkey back in the summer of 2016.

Back in March 2016, Sleaze Roxx interviewed The Madcap band members and asked them what was the message that the song “Rock N’ Roll Revolution” was meant to convey. Guitarist Deniz replied as follows: ““Rock N’ Roll Revolution” is our answer to those people, especially managers in Turkey. Most managers here lead bands to play and write Turkish songs, and play all classic songs that every band plays which you can’t really call rock songs, because those are what the general audience want to hear. Most bands follow them. Those people in the industry look at the bands like products they can sell. Most of the music produced in Turkey is slow, depressed and sounds the same. And even pop musicians call themselves rockers. So we think it is a good time to stand up and shut their mouths up with real rock n’ roll.”

The group’s live performance of the song “Rock N’ Roll Revolution” starts at about the 0.22 mark of the video below.

THE MADCAP performs the song “ROCK N’ ROLL REVOLUTION” for BalconyTV.Subscribe to us right now at http://bit.ly/15yj4oc ‘Like’ us on Facebook – http://Facebo…