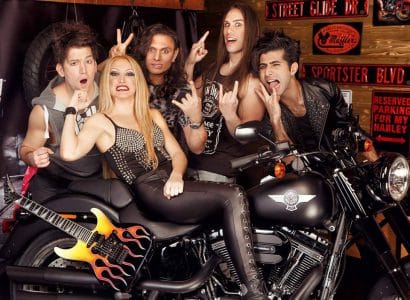 Turkish glam metal rockers The Madcap have released a video for their song “3 2 1” which lead vocals are sung in the Turkish language and which is included as a bonus track on their debut album The Madcap Rising.

Sleaze Roxx stated the following in its review of The Madcap‘s debut album The Madcap Rising: “Say what you will about Steel Panther, they are among the very best at coming up with catchy hooks and melodies in the last ten plus years. When I heard The Madcap‘s debut single “Rock N’ Roll Revolution” more than a year ago, I thought that this was a band — or really an individual in guitarist Deniz Sayman — that could potentially rival Steel Panther in terms of writing catchy hooks, melodies and cool guitar riffs. As it turns out, The Madcap‘s guitarist Deniz Sayman is definitely a good songwriter but not quite at the level that Steel Panther have attained. That being said, he does write catchy tunes with some good variations just like Panther do but sometimes, a little more work is needed to get the songs to that next level.”

Sleaze Roxx concluded its review by stating: “Overall, I really like The Madcap‘s debut album The Madcap Rising. The subject matters that are tackled in The Madcap‘s songs feel too PG for my liking (I guess I am just accustomed to the sex, drugs and rock n’ roll topics) but there’s no question that the Turkish glam rock group’s songs are for the most part well crafted and enjoyable to listen to.”