In this day and age when many band members from hard rock and heavy metal are not able to make a living strictly from their musical endeavours, it may come to a surprise that one group has been able to do so. 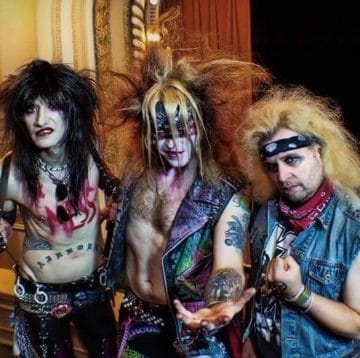 The Midnight Devils‘ frontman Sam Spade was recently interviewed by Melody Lane and asked as a musician, what has been his biggest achievement to date and what does he want to achieve in the near future.

Spade replied: “Pure and simply my biggest achievement and I can say this for the rest of the guys, is that we have been able to sustain a career for this long without having to get a real job. We get to put out records, do interviews, tour the country (and soon the world), and play our guitars every night of the week. We get to live rock n roll and that is success to me. Everything else is just an added bonus. We’ve played with some of our heroes, hung out with some of the guys that influenced us and played those massive festivals. At the end of the day you still have to win over fans one by one. It all comes down to passion and determination. What are you willing to do?”

In terms of where the band name The Midnight Devils came from, Spade advised: “The phrase Midnight Devils came simply from a strange feeling I got every night as the sun went down. During the day everyone acts so proper, going to work, taking care of the family, paying bills, answering to the boss but when the sun goes down on a Friday or Saturday night everyone cuts loose and turns into maniacs. It’s that same feeling you get when you are cruising with your friends to a big rock n roll show or a wild party.  That sense of freedom and “anything is possible.” Up until this point, we had never been in band with “The” in the title so much like The Who or The Rolling Stones we simply became The Midnight Devils.”

With respect to The Midnight Devils‘ roots, Spade stated: “The Midnight Devils have had a few changes but over the last year and a half we have had the same lineup. We started this band out of the ashes of another band. The singer wanted off the road so we decided to move on without him and create a wilder, more out of control touring rock n roll band. We wanted it to be unpredictable, rude, and filthy. We wanted to be that dangerous glam rock band that couldn’t be labeled and turned heads where ever we went. Mission accomplished. We live this way every day not just when the lights come up on the stage. As a three piece we started out with a different drummer but he couldn’t hang and didn’t last long. The current lineup featuring Jimmy Mess on the drums, Chris “Sniper” Hineline on guitar and me on vocals has been rock solid since the Rocklahoma Festival in 2017. We have done so many cool shows in states all across the Midwest. It’s been one hell of a fun ride so far and we aren’t even that far into it yet.”

You can read the rest of the interview with Sam Spade at Melody Lane.