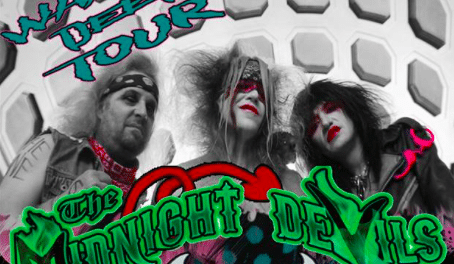 Omaha, Nebraska, USA rockers The Midnight Devils will be embarking other Way Too Deep Tour of the USA, which will see the band play 13 shows in 16 days from March 29 to April 13, 2019. 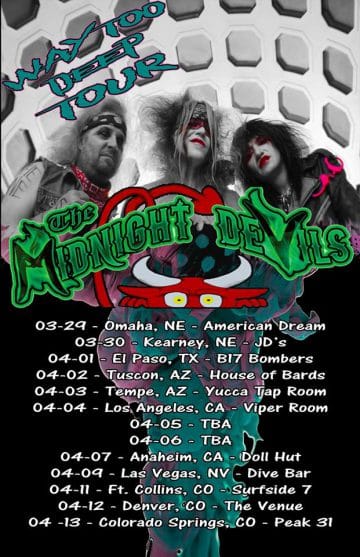 “The Midnight Devils are a glam slam boogie woogie rock n roll band from Omaha, NE featuring Sam Spade (Vocals and bass), Sniper (Lead guitar), and Jimmy Mess from Chicago, IL (Drums).  Performing at Rocklahoma 2018 and Rock N Skull 8 among 100s of other shows, The Midnight Devils released their debut album Something Bigger in October 2018.  Now embarking on their Way Too Deep national tour, The Midnight Devils are scheduled to perform 13 dates to the west coast and back including shows at The Viper Room in LA, The Dive Bar in Las Vegas with Sin City Rejects, and The Venue in Denver, CO with John Corabi.  This leg of the Way Too Deep tour kicks off Friday, March 29th in Omaha, NE at the American Dream bar and wraps up April 13th at Peak 31 in Colorado Springs, CO.”