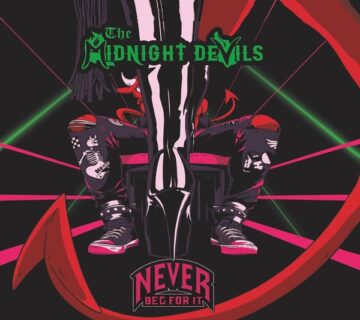 Omaha, Nebraska, USA based The Midnight Devils consisting of Sam Spade on lead vocals and bass, Chris “Sniper” Hineline on guitar and Jimmy Mess (ex-Pretty Boy Floyd) on drums have unveiled the first single titled “Highway 69” from their upcoming sophomore album Never Beg For It, which will be available via Pavement Entertainment on July 1, 2022.

In a recent interview with Sleaze Roxx, Mess commented on how The Midnight Devils‘ upcoming record Never Beg For It compares to their debut album Something Bigger. “Yeah, I think it’s fuckin’ way better. ‘Something Bigger’ is cool, and it was a great album, but I had just joined the band at that point. So a lot of the songs on ‘Something Bigger’ were songs that Sam and Chris had already wrote and I was coming in and learning them. Whereas this album was all three of us kind of putting our heads together and I feel like this is a better representation of what we sound like. Although of course, ‘Something Bigger’, I’m really happy about. I’m really proud of that album too. But I feel like….”