The New Wave of Hair Metal — a new term? 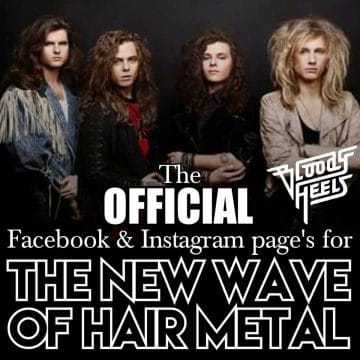 A new Facebook page entitled The New Wave of Hair Metal has been created which describes itself in part as follows on its page in the “About” section:

The New Wave of Hair Metal recently interviewed the Bloody Heels frontman Vicky White and asked him about his band’s influences. White responded: “Well, of course we love 80s, and I would be lying if I said that we didn’t. We are heavily inspired by bands like… well you know. My favorite band is Silent Rage, pretty small one, but I just love pretty much everything about them. But of course that’s not it, we are pretty open minded, we listen to a lot of different genres and artists. For example Gus, our drummer, he loves progressive music, jazz and funk. Chris‘ all time favorite band is Queen. He loves lot of 70s stuff. Harry and I, we even listen to pop-music, the good stuff of course, haha. So yeah… If you are musician, you have to be open minded. You can always take something good from all different kinds of music, artists etc. And I think that most musicians are like that.”

In terms of how long that Bloody Heels took to record their new studio album Through Mystery, White stated: “Thanks! I’m so happy that it’s finally out. We’ve waited for this moment for so long, you couldn’t even imagine. We started to record the album in September 2015. And to be honest, it was a pretty hard process. One of our guitarists left the band while we were recording it. So Harry had to do a lot more work. We really learned so much doing “Through Mystery“, so there’s no doubt that the next one will be a bit easier to get done.”

You can read the rest of the interview with White at The New Wave of Hair Metal’s Facebook page.