The man behind The New Wave of Hair Metal‘s Facebook page — who is simply known as Tom — is also the voice at the beginning of Nasty Ratz‘s video for their single “Against The World” from their latest album Second Chance?, which was released back in December 2019. 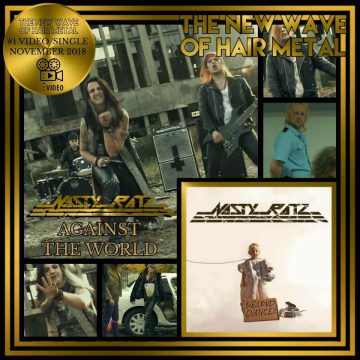 The following message was posted on The New Wave of Hair Metal‘s Facebook page earlier today:

“There are two guest stars in this video. The first is former Nasty Ratz bassist Tommy Christen, and the second is me. I’m not in the video, but I’m the voice you hear in the beginning of it. Frontman Jake Widow asked me if I would do it. I agreed and he recorded it over messenger. I took me a million takes to get it where it sounds somewhat “decent”, ???. Jake was a great coach, and he had a LOT of patience with me, ?. “Ok, this time try doing it without YELLING!” ???. I’ve handed out MANY awards over the years. I never thought I would ever be presenting myself with one. I got to know what it feels like to be cool and walk away with a #1.”

“If Sleaze Roxx had a Top 15 rather than a Top 10 Albums of the Year list, Nasty Ratz‘s Second Chance? would have definitely made the Top 15 for 2019. If you like Crashdïet, picking up Nasty Ratz‘s Second Chance? is a no brainer. Perhaps the biggest compliment that I can give to Nasty Ratz is that when they released First Bite, I viewed them as a band trying but not making the cut to be part of The New Wave of Hair Metal (I concede that the term was seemingly coined a few years after First Bite‘s release) but my perception has now changed with Second Chance? and I view them now as one of the leaders in that category.”