Italian rockers The Ohmygods consisting of lead vocalist Robbie, guitarist Matze, drummer Grueni and bassist Lex have released a lyric video for their debut single “Fire In The Hole.”

The group describes its sound as follows on its Facebook page:

“No acoustic guitars, no ballads, no bullshit – just pure straight ahead rock’n’roll to make your car go faster!” 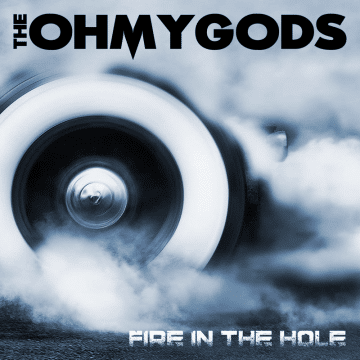 Speaking exclusively to Sleaze Roxx, The Ohmygods frontman Robbie explained how the group evolved from a rockabilly band back in 2006 to a straight up rock n’ roll band in 2020. Robbie indicated: “The band was started in 2006 by drummer Grueni, an upright bassist, and a singer that stayed for less than a year. They needed a guitarist, so they asked Matze, and then they needed a songwriter, so they asked me [laughs]. When the singer went away, I took over vocal duties as I already singing in another band at the time. We started doing a lot of gigs, and finally did record a full album in 2011. We disbanded just a few months after the first album release in 2011, and the band went on a seven-year hiatus. The main cause was guitarist Matze’s decision to move to Austria.

In 2018, Matze came back, and it was just a natural move to regroup. We all started talking to each other about it, and the only one who wasn’t interested in a reunion was the upright bassist. So we started looking for a substitute, but it ain’t easy to find one here, at all. In the end, we did an audition with Lex who has a five-string active electric bass. Well, he was good, and we got along really well, but it was like we had two separate sections. Lex and Grueni, who has actually always being a metalhead, were pounding like 1983-ish Nikki Sixx and Tommy Lee, while me and Matze were trying to keep our guitars as clean as possible. And that was kind of funny, because it’s me and Matze who are the real classic hard rock fans! So we talked about it for maybe 30 seconds, pumped up the volume and did a restart. The classic AC/DC-influenced ’80s hard rock style is my favorite since forever, so I already had many riffs and song ideas to develop.”

In terms of The Ohmygods band members, Robbie advised: “Everyone in the band is in since day one back in 2006, except for Lex, who joined us in 2018, after the restart. I’m the sleaze-glam aficionado. I was listening to a lot of AC/DC and Aerosmith in the mid-’90s and, since I was looking for similar sounding records, I bought the Night Songs and Shout At The Devil CDs back in 1996. I was immediately hooked in… I spent most of the grey late ’90s/early 2000s looking for ’80s CDs in the bargain bins literally all over Europe. Some of my favourite bands from back then are Skid Row, D-A-D, KIX and Cinderella, and I think the best album of all time is Appetite For Destruction. Some contemporary favourites are Hardcore Superstar, Babylon Bombs, American Dog and Hardbone.

Matze is an AC/DC freak. He knows every single riff off their catalogue, and that’s our main link, musically. We both have a very strong bluesy influences too, like most, if not all the ’80s style bands. Lex is more on the — dare I say it [laughs] — alternative side of things, but he’s slowly appreciating classic hard rock more and more. He likes bluesy things as well, so that helps us get along musically. Grueni loves everything that has a bombastic drum sound on it, from Slipknot to Airbourne, from Papa Roach to Hardcore Superstar. He’s the one who wants everything to be big and loud, so he’s right at home with the ’80s influenced sound and attitude!”

With respect to whether there’s an EP or album in the works for the future, Robbie stated: “Well, we recorded two songs in November. The idea was to release the first single “We Are A Rock’n’roll Band” in March, the second one,“Fire In The Hole” in June, record and release a third and a fourth single in autumn / winter, and then plan the recording and release of the first full album for the first half of 2021. Then this whole Covid-19 thing came out and we have had to adapt, like everyone else. We had to switch the two singles, because we planned a “real action” video for “We Are A Rock’n’roll Band” and we cannot film it at the moment. We don’t even have “real” band photos, because we planned to shoot them while making the video, and that is all postponed now of course, even though it shouldn’t be long now. At this point, we are seriously thinking about just directly doing the full album next. This is also because, as you can imagine, we have written a lot in this period of quarantine! Fingers crossed for a 2020 release.”

The Ohmygods‘ “Fire In The Hole” lyric video:

The Ohmygods – Fire In The Hole (official)