The Phoenix release lyric video for “My Turn To Deal” 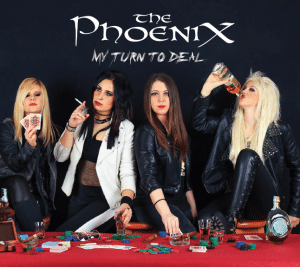 The Phoenix, which consist of four females hailing from Italy, have released a lyric video for their song “My Turn To Deal” from their EP bearing the same title and which has been released today via Demon Doll Records in collaboration with Atomic Stuff Promotion.

The Phoenix had a CD release party at the Red Devil Motors Pub in their hometown of Rimini, Italy with Vain Vipers, on January 30, 2016. The group posted the following message (in part) on its Facebook page yesterday: “We would like to say thank you to all the people who came to our release party on saturday night!! WE HAD A BLAST!”

The Phoenix – My Turn To Deal

Lyrics Video for My Turn To DealTitle Track from the EP released by Demon Doll Records February 2016. BUY YOUR COPY HERE: Worldwide: http://www.demondollreco…