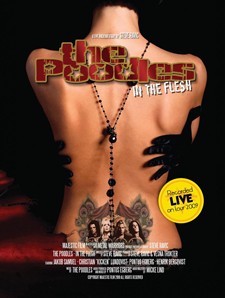 Frontiers Records is pleased to announce the release of THE POODLES live package including the “No Quarter” CD and “In The Flesh” DVD on November 5th 2010.

Having carved in stone their reputation as prime time entertainers with the release of three acclaimed studio albums and over 350 shows in the entire Europe in the past few years, not counting Gold and Platinum record awards in their home country, THE POODLES close the first chapter of their musical adventure and set their sails for the next step.

As a tribute to the first years on the road, THE POODLES offer the fans a live package including a CD and a DVD recorded during the “Clash of the Elements” tour in 2009, which portrays the band in the most natural environment: the live show. “The high points for us as a band is anytime we go on stage”, says guitar player Henrik Bergqvist. “This may sound like somewhat of a cliche but it is no less true. It doesn’t matter if we play a crowd of 10.000 people at Graspop or in front of a handful on a rainy November Monday in Copenhagen, those are the moments we relish and live for. We’ve had so many special moments on stage over the past couple of years that it seems impossible to single even a few of them out. Having said this, some special moments can certainly be seen on the live DVD and heard on the live CD”.

“We are very proud of how the live CD and live DVD turned out and we feel that they really shows what the band is like on stage” continues Bergqvist, “being able to watch a DVD of your favourite band is great and there are a few really nice ones out there, but the connection that takes place between the band and the crowd during live shows cannot be formatted to the screen. You can catch a glimpse of it, but to experience a band live will always be different from listening to or viewing a recording of that band. Have a look and see for yourselves, though!”

Aptly titled “In The Flesh” the DVD is a real in deep look at the Poodles style of life with in-deep interviews, that present each band member, behind-the stage instant footage and a collection of the promo videoclips shot for the “Clash of the Elements” promotion. In addition, a selection of the band’s classic cuts performed live shows that the Poodles are delivering the goods when the play live. The live cd, soundtrack of the DVD, plus the song “Lullaby For Jimmy” as cd exclusive, shows that behind the look and the words there is a solid band playing great music!

Henrik concludes: “The future plans for The Poodles is closely connected to the band’s cooperation with Frontiers Records. The band expects to play for an ever expanding audience as a result of it and take the mission of Heavy Metal to virgin lands. We want to see our beloved fans again on the road and make new friends too. The future is bright for us, and that’s good because we already wear shades!”

The live CD “No Quarter” tracklisting includes:
Too Much Of Everything; Caroline; Seven Seas; Metal Will Stand Tall; Like No Tomorrow; One Out Of Ten; Lullaby For Jimmy; Drum Solo; Echoes From The Past; Thunderball; I Rule The Night; Night Of Passion; Flesh & Blood; Line Of Fire.

The Live DVD “In The Flesh” table of contents include:
Movie: Introduction; Stockholm, Party & Fun; About The Poodles; Metal Standing Tall; The Director & Crew; Being On Top; Jakob; Henrik; Pontus; Kicken; The First Five Rows; Tribute To The Fans; End Credits.Concert: Too Much Of Everything; Caroline; Seven Seas; Metal Will Stand Tall; Like No Tomorrow; One Out Of Ten; Echoes From The Past; Thunderball; I Rule The Night; Night Of Passion; Flesh & Blood; Line Of Fire.Extras: Like No Tomorrow (Video); I Rule The Night (Video); In The Flesh (Video); Warrior (The Movie Trailer); Majestic Film And Metal Warriors

The DVD will be released in NTSC Region Free format with Screen 16:9 and Mix in 2.0.

There will also be a limited release of a luxury packaging including the live CD “No Quarter” and the DVD “In The Flesh” is a luxury digipak edition.

“In The Flesh” trailer can be enjoyed below:

The songs “One Out Of Ten” and “Caroline” can exclusively be listened in full in streaming on the Frontiers Web radio. Tune in at: www.frontiers.it/webradio