Australian hard rockers The Poor and Palace of The King are teaming up for the aptly named When The King Met The Poor tour throughout the east coast of Australia starting on August 2, 2019. 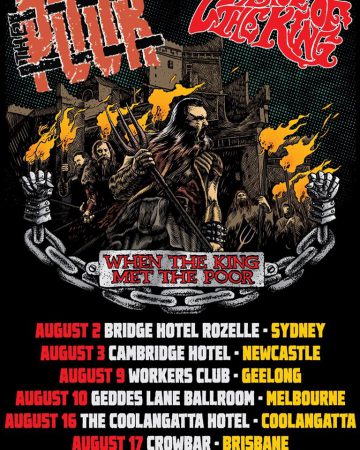 Earlier this month was the 25th year anniversary of the release of The Poor‘s debut album Who Cares and Sleaze Roxx stated in its review: “Before Airbourne made an attempt at becoming Australia’s rock successor to AC/DC, there was another band back in the late ’80s called The Poor Boys who were being touted as Australia’s next big rock export.” Sleaze Roxx concluded in its review: “Twenty five years after its initial release, Who Cares is still an enjoyable album from start to finish. It benefits from having a lot of musical variety to the songs, with some being fast paced, some being driven by the bass and most never having to rely on one repetitive riff. Lyrically there is also a lot of variety, with The Poor rarely taking themselves too seriously, except maybe for the song “Man of War”.”

Palace of The King‘s Biography on their website indicates in part: “Formed in late 2012, Palace Of The King – nameless at that point – quickly recorded a 3 track demo and developed the vision of a blues-infused rock and roll band. Far from a grave-robbing retro trip, Palace Of The King has just as much in common with Rival Sons, Graveyard & Jack White as they do Led Zeppelin, Black Sabbath & Deep Purple. Remember when bands released an album a year and toured ’til the wheels fell off the tour van?”

Palace of The King‘s “White Bird (Bring Your Armies Against Me)” video: