The Poor release video for new single “Payback’s A Bitch”

Aussie rockers The Poor consisting of frontman Anthony “Skenie” Skene, bassist Matt Whitby, drummer Gavin Hansen and guitarist Daniel Cox have released a video for their new single “Payback’s A Bitch” from their upcoming new album, which will be available later in 2022. 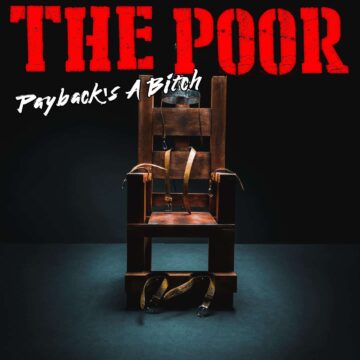 The caption for the video on Reckless Records‘ YouTube page indicates (with slight edits):

“The Poor return with the first single ‘Payback’s A Bitch’ from their forthcoming 2022 album.

The Poor started out playing the pub circuit in Darwin nearly two decades ago. The plan was simple, hard rockin’ hard drinkin’ and world domination. In 1992, the band cut their debut release, the EP Rude, Crude & Tattooed, produced by Rick Brewster & Bob Spencer from The Angels and from the opening line you knew it was going to be something great; Aussie pub rock, in your face, no bullshit, straight to the point, rock’n’f%&k’n’roll! In mid 1993, the band recorded their debut album, Who Cares, at Festival Studios in Sydney and Montreal, Canada with English producer Paul Northfield.

The Poor Boys also became The Poor, the name change was straight to the point just like the band and on March 21st 1994, Epic Records USA released the single, “More Wine Waiter Please”. It instantly became the number one most added track on US rock radio and attracted unprecedented acclaim from the U.S. rock press. Australia soon followed suit with the release of Who Cares on June 13 that year. There was no stopping them now and with a mega hit single and album, the whole world wanted a piece of The Poor. They toured relentlessly, drank hard and rocked harder. Over the next two years, The Poor toured the States (twice), Europe, Japan and all over Australia. During their turbulent roller coaster ride they scored support slots for The Angels, AC/DC, KISS, the Scorpions, Alice In Chains & Van Halen just to name a few.

After relentlessly touring to support Who Cares and playing over 20 brand new songs to rock fans worldwide, they came to the realization that they had already toured the world with the second album without actually releasing it! Was this a case of too much too soon or the simple fact that they toured their asses off on the road for so long? 1998 saw the release of the single ‘Simple Livin’ and with the birth of a new decade, The Poor went into hibernation.

It wasn’t until 2008 that The Poor returned to the stage for the first time in over 10 years when they were invited to join US metal icons W.A.S.P. on a national tour around of Australia as special guests. Within minutes of being back on stage on the first night of the tour, it seemed that those 10 years had passed in the blink on an eye. The Poor partied with many old time fans while gaining many new fans who were witnessing their super charged live performance for the very first time. With a taste of how it used to be and their hunger well and truly back, The Poor teamed up with Riot Entertainment in 2009 to unleash a barrage of material which was an album titled “Round 1” which saw the band do a string of sell out shows including a set at the Gold Coast Big Day Out 2010 where many believe it was a lesson to a lot of current new acts on how its done. If you’re a fan of no bullshit straight up rock n roll, you wont be disappointed!!”

The Poor‘s “Payback’s A Bitch” video: