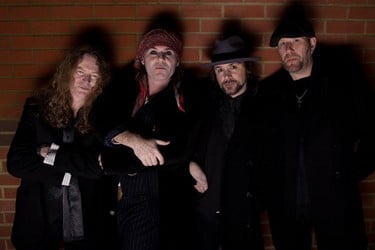 Thirty years into their career The Quireboys are ready to celebrate a golden age of music with ‘Black Eyed Sons’, a new album slated for release on June 16th through Off Yer Rocka Recordings.

Following hot on the heels of last year’s critically acclaimed ‘Beautiful Curse’ — the band’s biggest-selling record since their early ’90s heyday — comes ‘Black Eyed Sons’, an album produced by the legendary Chris Tsangarides that represents yet another career high for the band.

‘Black Eyed Sons’ will include a live CD and live DVD. Packaged alongside a CD of The Quireboys’ main stage acoustic set at 2013’s Sweden Rock festival — in front of 40,000 fans — and a live 7 CAM shot DVD featuring the London leg of last year’s ‘Beautiful Curse’ tour, this a must-have for long-time fans and new converts alike.