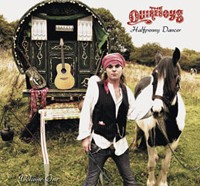 The Quireboys critically acclaimed album ‘Halfpenny Dancer’ has now been officially released with two new tracks, “Halfpenny Dancer” and “Have A Drink With Me”, with new packaging/booklet. The CD will be a featured album of the month in HMV stores. Anyone who bought the first, website only edition, please be aware that this is a collectible edition as there were only 1000 copies printed.

In a recent interview with Sleaze Roxx, Quireboys guitarist Guy Griffin had this to say about some of the songs on ‘Halfpenny Dancer’, “Some of the songs, like Pretty Girls and stuff, was my idea because Spike wouldn’t do them because they were so old. But I said well, those are the songs I really liked. Pretty Girls is a B side we did on the Bit Of What You Fancy album. They’re great songs, and Guy Bailey wrote some great songs. Some weren’t even on record, like Devil of A Man. I remember doing that song 20 years ago and it never ended up on an album so why not put it out there? It’s a great song.”