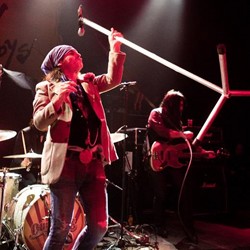 The Quireboys To Shoot DVD On European Tour

Following the recent success of the band’s latest studio album ‘Beautiful Curse’, which sold out on pre-sale, The Quireboys are pleased to announce they will be shooting the entire London show at O2 Islington Academy on October 17th with a multi-angle seven camera set up.

The current UK leg of the tour is virtually sold out. This 90 minute roller coaster set will feature classics, rarities and quite a few new tracks from the current album ‘Beautiful Curse’. Fans are also invited to vote on the band’s Facebook page at www.facebook.com/quireboys, town by town, on two tracks that they must include in the set. The band have been in the rehearsal studios all week making sure they have all tracks covered in the eventuality something very rare is voted into a specific town.

Vocalist Spike commented, “I never really bothered with rehearsals before, however this is a very special tour with an incredible mix of tracks. This particular set will amaze fans old & new alike and with the new shoot, we can make sure we grab all that magic in motion for a quality future release.”