Aussie melodic rockers The Radio Sun have released a lyric video for their song “As Long As You Want Me” from their upcoming new studio album and fifth full-length album Beautiful Strange, which will be released on August 24, 2018. 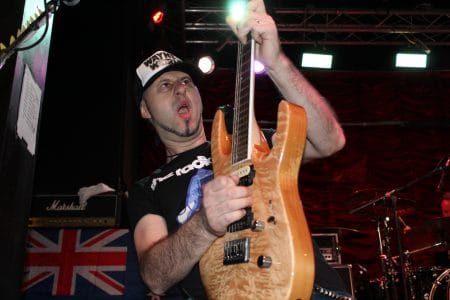 The group previously released a video for the track “Hold On Tight.”

Sleaze Roxx had the opportunity to catch The Radio Sun playing live at the Rock N Skull Festival in late October 2016 and stated as follows in its review of the band’s performance on Day Two of the festival.

“Probably the most anticipated “first” band to play of any of the four Rock N Skull 2016 days (including the Pre-Party) had to be  Australian melodic rockers The Radio Sun. It seemed that there was quite the sizeable crowd for The Radio Sun. There were even two people who had flown from Mexico especially to see them. The Radio Sun did not disappoint with their catchy brand of melodic rock. The group consisting of lead guitarist Stevie Janevski, singer and rhythm guitarist Jason Old, bassist Robbie Erdmanis and drummer Ben Wignall were enthusiastic and put on a solid opening set. Old joked with the crowd in his Aussie laced English that he was having a bad hair day as his long curly black hair apparently did not look right to him.

The Radio Sun went out of their way to make the two Mexican fans’ journey to Rock N Skull a very special one. Apparently, the female Mexican fan got a tattoo with the name of or lyrics from one song from The Radio Sun repertoire. Old advised prior to The Radio Sun playing their last song of their set that they did not have time to play the song that was mentioned on the female Mexican fan’s tattoo but that they would do an impromptu and unrehearsed portion of the track live for her, which they pulled off successfully. At the end of the day, my favorite tracks that The Radio Sun played were the heavier and more riff based ones. I particularly enjoyed “World’s Crazy Now” and “Can’t Get You Out Of My Head.” Overall, The Radio Sun put on a strong performance and sounded heavier live than what I have heard from their studio albums.”

The Radio Sun‘s new studio album can be pre-ordered for $15 (free worldwide shipping) via the band’s Shop Now page at www.facebook.com/theradiosun“

The Radio Sun‘s “As Long As You Want Me” lyric video:

The Radio Sun – As Long As You Want Me (Lyric Video)

This is the lyric video for the track “As Long As You Want Me” which was taken from THE RADIO SUN’s coming album “Beautiful Strange”. Release date: August 24…