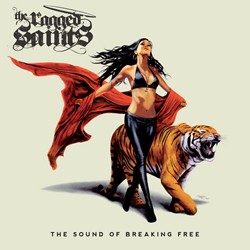 The Ragged Saints have signed with German record label Power Prog to release their debut album ‘The Sound Of Breaking Free’ on October 25th in Europe and North America (via partner Nightmare Records).

What can you expect of The Ragged Saints and their debut album? Innovations? Something absolutely new? You can expect an extraordinary piece of hard rock, handmade and with abandon. An entertaining time travelback to the glory ’80s, with great catchy melodies, creaking guitars and straight rhythms, all packed in an up-to-date sound garment without sacrificing the roots and the feeling of one of the greatest musical eras.

With ‘The Sound Of Breaking Free’, The Ragged Saints take the good old virtues over to a new millennium and for a new generation. The album was mixed at Sonic Pump Studios by Nino Laurenne (Amorphis, Lordi, Finntroll, Kotipelto) and mastered at Chartmakers by Svante Forsback (Volbeat, Rammstein, Amorphis, Sonata Arctica).

Guitarists Tomi Julkunen and Toni Bite came up with an idea to form a new band after a Whitesnake concert when they realized their love for ’80s hard rock bands. With spare time on their hands, the duo decided to write and record a couple of songs just for fun. One song turned into two, two into three and soon enough they had albums worth of brand new hard rock songs. Like-minded bass player Jukka Hoffren and drummer Miikki Kunttu joined them a bit later when it was time to start recording those songs in the studio. Singer Markku Kuikka was the last member to join the band in the fall of 2012…. and The Ragged Saints were born.