The Revel unveil video for single “And It Goes”

New Jersey, USA based rockers The Revel consisting of frontman Dean D’Antuono, lead guitarist Dillon D’Antuono, bassist Stephen Mir and drummer Kyle Smith have unveiled a video for their new single “And It Goes” from their upcoming new EP, which will be released later this year. 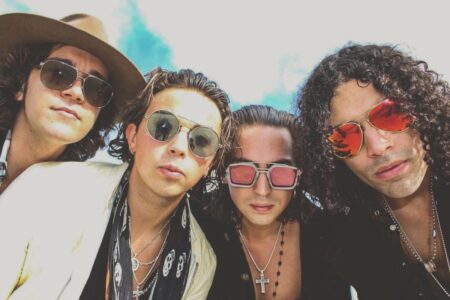 “NJ rock band, The Revel, today release their new single “And It Goes,” from their upcoming 2021 EP.

“And It Goes” sees the band lock into an airtight four-on-the-floor groove as the momentum builds towards a swaggering chant. The song features Dean’s dominating vocals over a steady groove led by drummer, Kyle Smith. This groove builds up to an explosive chorus and addictive hook, characterized by energetic chanting. Dillon’s lively guitar riff brings a classic rock ‘n roll feeling to the song that exhibits the group’s rebellious essence. This new single is yet another song that showcased The Revel’s rock ‘n roll roots demonstrated by their commanding presence through their music.

“The goal was to write something that would get stuck in your head no matter what,” Dean explains. “We’re combining this earworm vibe with meaningful lyrics. We really play every card on it. The recording process came naturally to us with this song; we all felt the direction.”

Dillon continues, “We’ve got this unbelievable chemistry. We’re so close now it’s like we can read each other’s minds. It completely opened up Pandora’s Box. We decided to capture that. Writing ‘And It Goes’, the intention was clear to get people to dance and move, but doing it with meaning and truth.”

The Revel’s 2019 EP, Don’t Let Me Go, received praise from American Songwriter, The Aquarian, and many more. American Songwriter wrote, “Dillon and Dean are…doing what they love, rocking out – Dean with his powerful and soaring vocals positioned next to Dillon’s groovy guitar licks – What more would you want?”

“And it Goes” was produced by Jimmy Gnecco (Ours) and was mastered by the Grammy Award-winning Emily Lazar at The Lodge. Emily’s many credits include Foo Fighters, Vampire Weekend, The Rolling Stones and Coldplay among others.

This song is the next step in the rock and roll ladder that The Revel has been building since 2017. After performing alongside icons such as Bon Jovi, Buckcherry, Joyous Wolf and others, they roared to life on a series of independent singles and with their upcoming 2021 EP, they will continue to bring a modern lens to the rock and roll they love.

The Revel‘s “And It Goes” video:

The New Jersey quartet—brothers Dean [lead vocals, guitar] and Dillon D’Antuono [lead guitar, backing vocals], Stephen Mir [bass, backing vocals], and Kyle Smith [drums]—pack a knockout punch with howling vocals, rip-roaring leads, and stadium-ready rhythms. In 2017, the duo made their debut with the self-titled The Revel EP. Welcoming Kyle and Stephen into the fold, the line-up solidified. During 2018, they caught the attention of Bon Jovi and opened up for the New Jersey legends at The Prudential Center in Newark. The guys also canvassed the country with the likes of Buckcherry and Joyous Wolf and unleashed the Don’t Let Me Go EP during 2019. In the midst of the Global Pandemic, they kicked into high gear creatively, cranking out new music.”