The Rumours unveil video for new single “Want Ya” 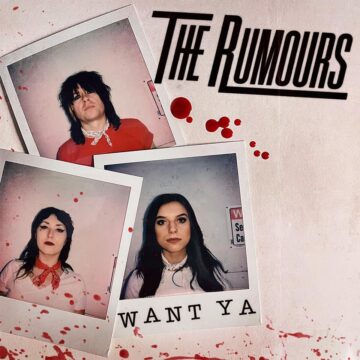 The Rumours consisting of Carli Foxx on lead vocals and guitar, Daniel Kluiter on drums, and Ela Rose on bass have unveiled a video for their new single “Want Ya.” The Rumours‘ latest studio album Suck It was released in mid-March 2020 right around when the Covid pandemic caused a worldwide shut down.

Sleaze Roxx stated the following in its review of Suck It:

“The Rumours‘ album Suck It is pretty much what I expected from them. Straight ahead punk laced rock n’ roll highlighted by Foxx‘s raspy vocals. For whatever reason, it reminds me a bit of a cross between The Runaways and Joan Jett & The Blackhearts but with less melodies. It seems that it is pedal to the metal almost all the time with The Rumours on Suck It as the group pretty much launches from one rocker to the next without going up for any air along the way. The reality is that if you like one of the songs on the record, odds are that you’ll like all of them as they all feel pretty similar. Although I like all of the songs on Suck It — how can you not like well played straight up punk laced rock n’ roll? — the reality is that there isn’t anything that really makes me pine to hear the record.”

The Rumours‘ “Want Ya” video: