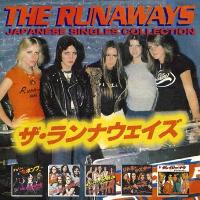 This collection brings all the band’s Japanese singles for the first time together on CD. The Runaways enjoyed huge success across Europe and Japan. With the band’s various line ups, Joan Jett, Lita Ford and crew enjoyed a high profile through their singles releases and their exceptional live shows.

This CD features all the band’s highly collectable Japanese picture cover single sleeves, lyrics, discography and sleeve notes. The CD features 2 bonus tracks, the UK single “Right Now” and it’s b-side “Black Leather”. This was to be the band’s last single release. The Runaways were formed in L.A. and guided by Kim Fowley.

At the time of formation, the band members aged 16-17 years old and soon went on to sign a record deal with Mercury Records.

To view more releases from The Runaways visit www.cherryred.co.uk/cherryred/artists/runaways.php