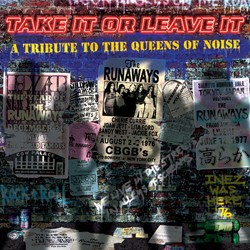 The Runaways Tribute Album To Include Original Band Members

‘Take It Or Leave It’, a 2-disc tribute to The Runaways featuring The Dandy Warhols, The Donnas, Care Bears on Fire, David Johansen, Shonen Knife, Peaches and more, will be released on June 28th through Main Man Records.

The Runaways changed the landscape and perception of women making music, and the influence of their short but bold career continues. The five teenagers who shattered glass ceilings with platform boots get feted by legendary artists, indie darlings and up-and-comers on Main Man Records’ June 28 release, ‘Take It Or Leave It’.

‘Take It Or Leave It’ is a 2-disc collection with 36 tracks that span The Runaways entire catalog. Their best known songs, like “Cherry Bomb” and “Queens Of Noise,” are represented alongside more obscure tunes like “Hollywood” and “Born To Be Bad.” The fullness of the selection makes it evident how generations of artists, from L7 and The Go-Gos to Redd Kross and Guns n’ Roses, call back to the passion-fueled rock sensibility of The Runaways.

Artists from various musical backgrounds donated their time and resources to help Main Man Records honor The Runaways. Some of the participants include The Donnas, Shonen Knife, The Adolescents, The Dandy Warhols, Richard Barone (of The Bongos), Derwood Andrews (of Generation X), Toilet Boys, Care Bears On Fire (with Earl Slick of David Bowie/New York Dolls), Kittie, Starz, David Johansen (of New York Dolls) and Kathleen Hanna (of Bikini Kill/Le Tigre) and Peaches, (whose collaboration was produced by Ad Rock of the Beastie Boys) as well as members of Frehley’s Comet, Monster Magnet, The Fastbacks, The Cucumbers, The Doughboys and Cousin Oliver from The Brady Bunch, Robbie Rist.

Interspersed with the music are interview clips with the members of The Runaways, mock radio ads by broadcast legends Rodney Bingenheimer, Carol Miller and “Mr. Marty” Martinez, candid comments from Johnny Ramone and a recollection of the band’s appearance at CBGB’s by noted radio personality Meg Griffin.

In Sandy West’s name, a donation from the proceeds of ‘Take It Or Leave It’ will be made to the American Institute for Cancer Research. Since 1982, the AICR’s mission has been to fund, support and promote research as well as expand public knowledge through educational programs to bring its message of cancer prevention to millions of Americans. To that end, the AICR has committed more than $82 million, and was the first organization in the nation to support research into the role of diet and exercise as it related to cancer prevention.