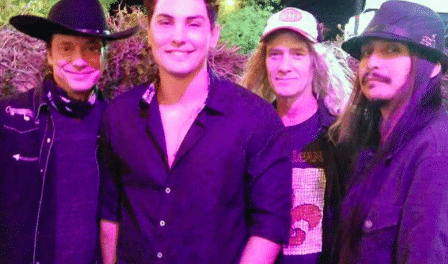 The Saints of Las Vegas consisting of Brent Muscat (ex-Faster Pussycat, ex-Sin City Sinners), Rob Cournoyer, Brandon Garcia and Anthony Serrano have released a lyric video for the song “Panic Room” after the release of the single “Tomeka.” 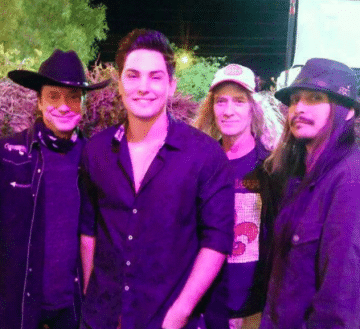 “This is the official Facebook page for The Saints of Las Vegas, a Vegas-based band that is known for a rollicking good time. Media savvy, and marketing friendly — Brent Muscat, Brandon Garcia, Rob Cournoyer and Anthony Serrano are known for their uptempo, fun shows with fan interaction, and an energetic song list that runs from power pop, classic rock, 90s rock, and a little bit of country and funk, too!

They play in casinos and other establishments across Nevada, Arizona and California, in addition to corporate and private events.

Brent is the co-founder of glam-rock legends Faster Pussycat. Faster Pussycat released three gold albums on Elektra Records. They toured the world with KISS, Motley Crue, Poison and David Lee Roth. They had a number one MTV video with “House of Pain.”

Rob Cournoyer hails from New Orleans, Louisiana and is a graduate of the prestigious Berklee School of Music. He is a former member of Raging Slab and also plays with the internationally popular band, Human Drama.

Brandon Garcia, is from Gallup, New Mexico and a member of the Navajo tribe. He is acclaimed guitarist and bassist who has played with a cross section of musicians here and abroad, including the legendary Prince during his residency in Las Vegas.

Anthony Serrano is a singer, songwriter and guitarist who is quickly making a name for himself. Originally from San Diego, California, he was scouted by many baseball teams before turning his attention full time to music.”