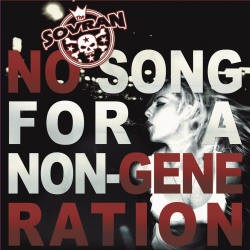 The Sovran have just unveiled the artwork for their upcoming debut album ‘No Song For A Non-Generation’, which is scheduled for release on March 4th via logic(il)logic Records (distributed by Atomic Stuff).

The Sovran formed back in September 1997 but truly got themselves into gear in March 1998 when, achieving a stable line-up, they released the first demo named ‘Black Rock’, their first raw piece of heavy metal/punk in Venom and Motorhead style. After that release the band decided to stop. The Sovran was reformed in 2003 and released the second demo CD ‘Hooligans’, getting amazing feedback from fans and magazines. During 2003 the band supported some underground bands and international acts like Paul Di’Anno. In the following years they released some promo CDs: ‘Cobra’ (2004), ‘Secret Agent’ (2005) and in the summer of 2006 the band released the 9 track promo ‘City Kills’.

The new sound was a personal mixture of all their influences, from high energy rock’n roll to punk to gothic ‘n wave. “….probably sounds like Motorhead meeting Killing Joke” said vocalist/guitarist Cpt. T. ‘City Kills’ was mostly enthusiastically reviewed and many people consider this new chapter as the highlight of the band. During the winter of 2007 The Sovran started their extensive promotion plan for the last promo CD by supporting some underground Italian acts and playing in some festival like the Total Metal Festival with Rage and Dark Funeral. A few months later in November 2007 The Sovran were back again in the studio and recorded the 9 track album ‘The Sovran Is Dead’. In winter 2008 the band played some gigs with Italian underground acts like Natron, Dome La Muerte and the Diggers, Rain and also supported the legendary Italian rocker Pino Scotto on his Italian ‘Datevi Fuoco Tour’.