You can purchase the single via various digital outlets. 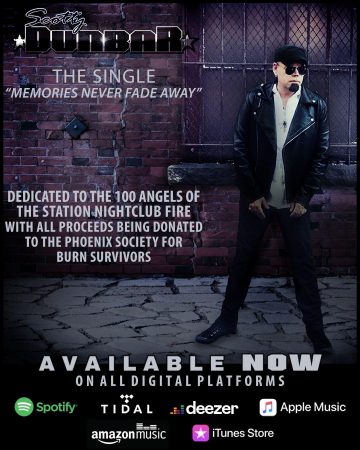 “Boston based solo musician Scotty Dunbar has released a new single “Memories Never Fade Away.” The song is dedicated to the 100 lives that perished in The Station Nightclub fire in West Warwick, RI on February 20th, 2003. Dunbar is a survivor of the fire.

All proceeds from the sales of the single “Memories Never Fade Away” will be donated to the Phoenix Society For Burn Survivors.

Scotty Dunbar stated the following on the singles release:

‘As some of you are aware, I am a survivor of The Station Nightclub fire which occurred on February 20th, 2003 in West Warwick, Rhode Island. I went to the show that night with my friends Derek Gray and Eugene “Gino” Avilez. They along with 98 other innocent souls perished in the fire.  My buddy Matt McArdle and I first began writing “Memories Never Fade Away” back in 2001 after the loss of a co-worker. Shortly after the fire in the winter of 2003, Matt and I revisited the song and we  completed it with the full lyrics and arrangement. Over the years, I have recorded a few versions of “Memories.” One was acoustic and the other was piano. However, it was never recorded the way I had envisioned. That is until now, as this newly recorded version is what I was looking for all along. Ted Merrill and Brian Karl helped me bring this song to life.

“Memories Never Fade Away” is dedicated to the 100 Angels of The Station Nightclub fire. Forever in my heart…'”

Wikipedia indicates the following in part about The Station Nightclub fire (with slight edits):

“The band returned to the national spotlight on 20 February 2003. At the beginning of a Great White performance at The Station Nightclub in Rhode Island, pyrotechnics used by the band’s crew created a spray of sparks that ignited the foam soundproofing material in the ceiling around the stage. One hundred people, including guitarist Ty Longley, died in the fire that followed. Approximately 115 survivors were badly burned, maimed and permanently disfigured. In 2008, Jack Russell Touring Inc., agreed to pay $1 million to survivors and victims’ relatives of the fire while admitting to no wrongdoing. This amount also covers former tour manager Daniel Biechele along with the band members, record label, and management as it existed at the time of the fire. The settlement was the maximum allowed under the band’s insurance plan.

On the two-year anniversary of the fire, Jack Russell and Mark Kendall, along with Jack Russell‘s attorney, Ed McPherson, appeared on Larry King Live with three of the victims of the fire and the father of Ty Longley, to discuss some of the healing that had taken place over the previous two years and some of the permanent scars that remained. Victims had previously received $3.8 million raised by United Way of America.

Though the media referred to the band as “Great White” following the tragedy in Rhode Island, the band was officially performing under the moniker of “Jack Russell’s Great White” at the time of the incident. Prior to the fire, the band’s official website posted a message stating that Great White had not re-formed. It’s unclear when the band began officially going by “Great White” again.”