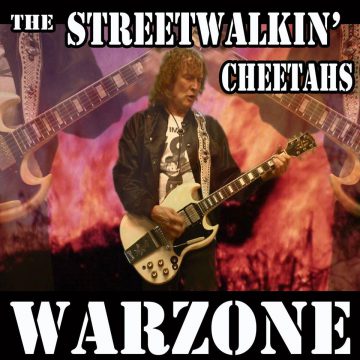 The Streetwalkin’ Cheetahs‘ “Biography” on their Facebook page indicates (with slight edits):

Back in the day, the band toured the world, recorded over 10 albums for iconic indie labels such as Triple XXX and Bomp!/Alive, appeared on over 100 compilations, soundtracks and tribute albums, and were critical darlings, receiving rave press in Rolling Stone, Spin, Alternative Press, Flipside, LA Weekly, and all the hip ‘zines and weeklies. Along the way, they scooped up a slew of New Times Awards, collaborated with punk legends such as Wayne Kramer (MC5), Cherie Currie (The Runaways), Sylvain Sylvain (New York Dolls), Jimmy Zero (Dead Boys) and Deniz Tek (Radio Birdman), and shared stages with such acts as the White Stripes, Queens of the Stone Age, Turbonegro, Supersuckers, Nashville Pussy, Reverend Horton Heat, Fishbone, Fear, John Frusciante, and countless others. And right before his untimely passing, Joey Ramone declared them his favorite band…ironic, considering a few years later Cheetahs frontman Meyer co-wrote the book On The Road With The Ramones.

In 2014, the Cheetahs brought back their sweat-drenched, high energy rock ‘n’ roll attack back to the stage to defend your right to rock. The boys released a 7″ vinyl single with two brand new songs via Little T&A Records/Big Cartel and followed with a west coast tour with Cheetah Chrome (Dead Boys). Since then, the band has been steadily touring festivals, clubs and sleazy bars near you.”