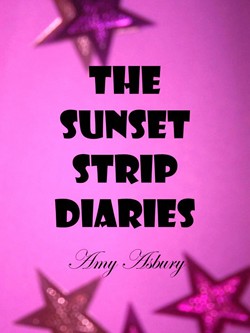 There comes a time in every girl’s life, where she has to choose good or choose bad. Amy Asbury chose bad, hands down. Good meant wallflowers, secretaries and subservient wives. Bad meant power- and a possible escape from a life of secrets.

At twelve years old she was trying to make sense of a drug-addicted father and his disturbing behavior. By fifteen she was dealing with horrendous depression, blackouts and rape. At sixteen she was in a mental institution for suicidal tendencies and violent behavior. She knew she could never be normal. The only place for a girl like her was Hollywood.

This is a true story of the social ascent (and eventual decline) of a girl in the Sunset Strip music scene of the early 1990’s. From crazy parties to glittered junkies and man-eating strippers, Amy has chronicled what life was like back in the days of excess and debauchery. It is not just a fascinating look into an amusing time in pop culture, but also details the mindset of a young woman trying to find confidence and self-worth in a life full of pain and chaos.

The party came screeching to a halt when the Grunge movement took over and heroin became more prominent. How far off track can a person go before it’s too late?

Check out The Sunset Strip Diaries by Amy Asbury on Amazon Kindle and paperback right now.

Ten Masa! The Whisky! The Roxy! Let’s take a ride back to THE STRIP!

“It was very dark out but there were so many lights twinkling from cars’ tail lights and night club signs that everything was lit up in reds, blues and pinks. I saw crowds of really cool people, all talking and laughing while passing one another on the sidewalks. It was like a huge street party. Some people were yelling to their friends across the street, and others were jaywalking through the traffic jam and shouting at their friends in cars. I saw lots of backlit marquees advertising bands that were playing at this place or that place. Eight by ten pieces of neon paper were stapled to every phone pole and littered the ground like huge chunks of confetti in hot pink, acid green, lemon yellow and bright turquoise blue. They were band ‘flyers.’ Band members passed them out to everyone walking by to try and get them to go to their performances…”

“There I was, breathing in the cigarette smoke, perfume and leather; feeling exhilarated and scared at the same time. The guys who walked around passing out flyers for their bands each had their own little theme. It was like Halloween- I felt like we were all trick or treating. There were guys with a beachy theme, some with a gypsy theme, and others with a kid’s cartoon theme. I saw variations of punk and glam, vampire and glam, and plain old beauty school dropout glam. Anyone could go to The Strip. It was public property. But to get in with the in-crowd? You had to have something they wanted…”

“In most crowds, men are chasing after females and the females are picking and choosing who they want. In this crowd, it was a very high ratio of women competing for a tiny ratio of men. I could tell it would be very hard to be a respected woman in the Sunset crowd. It seemed pretty impossible; laughable even…”

“…we went in and out of the Whisky, the Roxy, the Rainbow and Gazzarri’s, not to mention the sushi bar across the street from the Rainbow, Ten Masa. Every one of those places was always filled past capacity and we could barely move. We would continue the night getting increasingly drunk and doing reckless things like crawling over fences, getting in fights, or getting thrown out of bars. I felt like I was going to the biggest and best rager of the century every single weekend. It was non-stop. The vibe never died down. Even though there was chaos coming from all sides of me, I felt in my element within all of this craziness…”

“I was a regular high school student by day, trying to lead a normal life of writing commentaries for the school paper, making lopsided pots in ceramics and playing tennis in sweat shorts. I felt like a spy. It was hard to make conversation with girls my age who were going to the movies on Saturday nights in their high-waisted paper bag pants and teased bangs. Funny thing was, I was terrified of the normal kids. I wouldn’t have known what to say or do on a date or what to do at a house party or the movies…”