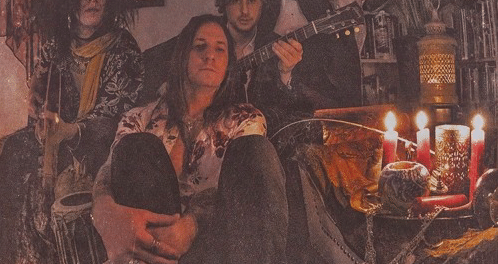 The Sweet Things to release debut album ‘In Borrowed Shoes, On Borrowed Time’ on May 24th

New York rockers The Sweet Things will be releasing their debut record In Borrowed Shoes, On Borrowed Time via Wendigo Productions NYC / Spaghetty Town Records tomorrow (on May 24, 2019). 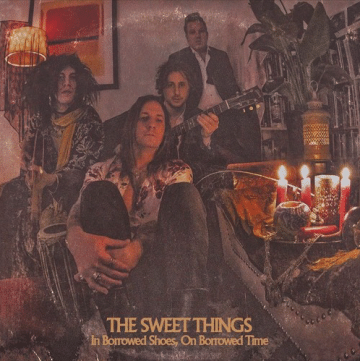 “The story goes that it was at Sid Eisenstein’s son’s bar mitzvah in the Catskills, New York where the four members of The Sweet Things first met. None of them really knew that snot-nosed kid but, they soon realized, pooled together, they sort of knew three songs: Lynyrd Skynyrd’s “Gimmie Three Steps,” Johnny Thunders & The Heartbreakers’ “One Track Mind,” and The Georgia Satellites’ “Six Years Gone.” So, with liquid courage, the boys raided the bandstand to fumble through an impromptu set. The rest, as they say, is history, and…kind of a blur.

The 10-track album captures those crudely delicate moments when Friday nights somehow morph into Tuesday afternoons. The party songs still ring out, but the remorse and longing for redemption begins to seep in. In Borrowed Shoes, On Borrowed Time finds the band stretching out with the help of friends such as Alejandro Escovedo on guest vocals; the legendary horn section The Uptown Horns (Rolling Stones, James Brown); Brian Hurd of beloved blues bashers Daddy Long Legs on harmonica; Rob Clores (The Black Crowes) on keyboards; and boogie chanteuse Liza Colby on the gospel vocals. Imagine if the 1972 Stones were exiled in the New York City’s East Village instead of the south of France.

The first taste of In Borrowed Shoes, On Borrowed Time the lyric video for the album track “Dead or Worse,” a cautionary tale born from blackout nights, getting hogtied and thrown out of bars for throwing shot glasses at walls, and vomiting in your girlfriend’s panty drawer. This banger boasts dueling nicotine-stained vocals, a rhythm section that understands Motown and the finer aspects of Jack Daniels, and slide guitar melodies that swerve and sway like a DUI-er on the loose. The album’s first official single, “Liquor Lightning” is the kind of roll ‘em and shake ‘em ditty you last hear before you end up in the hospital with your jaw wired shut. On the reflective side of things, the guys share a moment of high lonesome country melancholy with the album’s title track. Salvation and self-disgust have never sounded so sweet.

The Sweet Things have earned some plum press accolades for its two previous singles. ClassicRock magazine (U.K) featured the band’s single “Slather” on their May 2018 issue’s compilation CD and raved: “Imagine a world where bedraggled glam-bangers like the New York Dolls, Hanoi Rocks and the Quireboys stayed young and skinny and good looking forever. That’s the Sweet Things. Dig in.” This drunken four-headed monster has toured extensively throughout the U.S., and on June 2nd will make its UK debut at the Camden Rocks Festival (Frank Turner, Ash, The Wonder Stuff). Previously, The Sweet Things blazed through the U.S., touring throughout the West Coast, the Pacific Northwest, the East Coast, the South, and the Midwest.”