UK rockers The Treatment have released their first song with new lead vocalist Tom Rampton, which is titled “Let’s Get Dirty.” 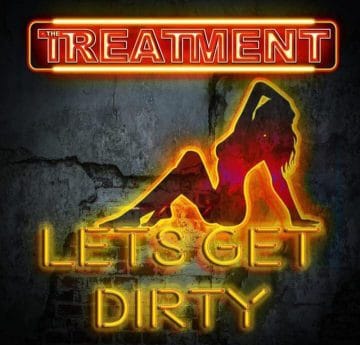 Rampton replaces singer Mitchel Emms who decided to leave the group back in September 2017. Emms handled the lead vocals on The Treatment‘s last studio album Generation Me, which ranked #4 on Sleaze Roxx’s Top Ten Albums of 2016 and #14 on the Sleaze Roxx Readers’ Top 20 Albums of 2016. Emms had replaced singer Matt Jones who appeared on The Treatment‘s first two albums This Might Hurt (2011) and Running With The Dogs (2014).

Sleaze Roxx stated the following of Generation Me‘s #4 finish on the Sleaze Roxx’s Top Ten Albums of 2016: “It’s always difficult replacing the voice of a band but The Treatment have proven that this can be successfully and smoothly done. After charting their first album This Might Hurt at #5 on Sleaze Roxx’s Top Ten Albums of 2011, The Treatment are back in the top ten but with new lead vocalist Michael Emms taking over the reigns from singer Matt Jones. Throw in that long-time guitarist Tagore Grey‘s little brother Tao Grey is handling the other guitarist’s duties and you have some significant line-up changes yet The Treatment have been able to not skip a beat with their latest album Generation Me. I lump The Treatment with bands like Eclipse and H.E.A.T who are consistently generating some of the best music of the last ten years yet are not getting their just due to the timing with when their music is coming out. Generation Me cements UK rockers The Treatment as one of the best most consistent new bands of the last ten years. With youth seemingly still on their side, it appears that we should be getting at least a few more albums from The Treatment in the future.”

The Treatment‘s “Let’s Get Dirty” song:

Provided to YouTube by The Orchard EnterprisesLet’s Get Dirty · The TreatmentLet’s Get Dirty℗ 2018 Frontiers RecordsReleased on: 2018-07-23Music Publisher: …